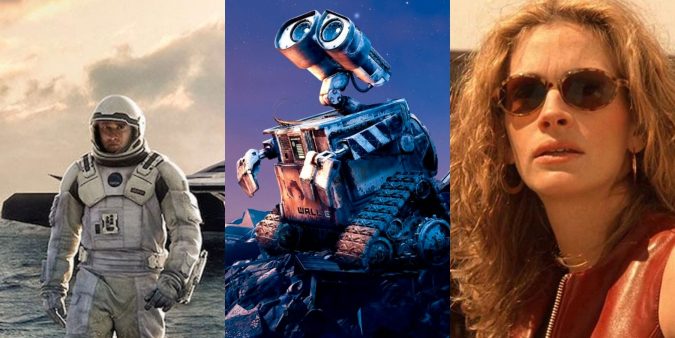 In the midst of Earth Awareness Month and Earth Day coming up later this April, many people are speculating on what they can do to protect the natural world.

There are a lot of great ways to honor the Earth, including many things to do year-round, and an excellent way to get inspired would be to watch some films that focus on the environment. From cute animations like Wall-E and Bambi to foreboding tales like The Day After Tomorrow and Interstellar, there is a range of great films that both highlight the beauty of nature and also warn against not protecting the planet.

While it is an end of the world movie, Wall-E is also an adorable love story between robots. In this Disney Pixar film, Wall-E is the lone robot left alone on Earth until Eve comes down to see if the planet is yet livable once again.

Though a funny and heartwarming tale, it’s also a world in which the earth is so covered in trash that it isn’t livable anymore. This animated family film acts as a warning that if people don’t take care of Earth, the future of the planet is quite bleak.

Bambi is an adorable Disney classic about a deer that is raised by the animals in the forest following the death of his mother, who was shot by a hunter.

This film acts both as environmental consciousness and animal activism. While there’s controversy to the aspect of the film that villainizes hunters and the sport, this animated classic does bring to attention the lives of animals in nature. By children and adults alike watching this film, audiences can have a better grasp of the importance of protecting the natural world.

This movie, in turn, is not as happy as loving robots and growing deer. The Day After Tomorrow is a science fiction disaster movie that follows the devastation of the Earth after severe climate change.

When the North Atlantic Ocean circulation is disrupted, a series of extreme weather ensues, bringing about a new ice age. This film is a cautionary tale that, by depicting a future in which people do not care about the climate, shows what can happen to the environment if people don’t care enough to take care of it.

In one of Julia Roberts’ best roles, Erin Brockovich presents a young woman who, after forcing herself into a job at a law office, discovers a connection between dangerous chemicals in groundwater and illness within several families in the area.

This discovery leads to a lawsuit against the company that knowingly dumped these chemicals in the water despite the risks. Based on a true story, this film acts as a cautionary tale to corporations with thin morals and a display of what tainted environmental resources can mean.

This legal thriller is similar to that of the story of Erin Brockovich. The plot follows Robert Bilott’s case against the company DuPont, a chemical manufacturing corporation, after they contaminate a town with unregulated chemicals.

While Erin Brockovich is a story of someone who connects with the people first and foremost to win the case, Bilott is a lawyer that makes great sacrifices to make the corporation pay. This film is great for audiences to see the widespread travesty of the Earth’s resources being contaminated.

While this movie quickly moves to tackle the complexity of disputing views on the meaning of life, the plot revolves around environmentalists fighting a big box store over a new complex being built.

This movie explores the meaning of life and disputing feelings about how to go about in a cute comedy packed with an all-star cast. Though not the main focus, the fight with the big box office is essential to the beginning of the film and brings to light people’s views on big stores ruining the natural landscape already slimming throughout cities around the world.

This classic 1970s mystery crime thriller is set in the California Water Wars, a time in which there was a series of disputes over southern California water.

In this exciting story of crime and investigation, a private investigator uncovers the truth that the water department has been drying up land in order for it to be sold cheaply. Chinatown still holds up as relevant today, showing the extent to which corporations will go for money, even if it means harming the environment.

Available To Rent On VUDU And Apple TV

FernGully: The Last Rainforest is another great animated film, but it is far more serious than others. In this film, fairies are threatened by a dangerous spirit who is gaining power from pollution caused by logging company machinery.

Though a happy ending, the metaphor of this film is clear: if humankind continues to use resources without regard for the effects on the environment, dangerous outcomes are in store. When a sprout is planted at the end of the film, it encourages damage to the Earth to be restored.

In the distant future, crop blights and a harmful dust bowl mean the ending of the planet’s habitability. This film follows a NASA pilot as he works on a plan to transport the Earth’s population to a new world through a wormhole.

Though a hopeful plotline, this story shows the bleak future if the environment is broken beyond repair. This highly ranked apocalypse film shows the prospects of the world if the natural world is not cared for.

This epic fantasy film explores a future in which the inhabitants of Earth travel to the planet Pandora to mine valuable minerals, disrupting and threatening the way of life of those who already live there.

Though an action-packed and exciting tale, this film begins with the planet’s desperate need for natural resources, which are greatly depleted. This highly regarded film is a cautionary tale that partly focuses on protecting natural resources while there’s still time.

Next: Zoe Saldana’s 10 Best Performances, According To Letterboxd

Jordan is a graduate student currently enrolled in a Popular Fiction and Publishing program. She is an adamant reader but enjoys watching TV and movies as much as opening a good book. Analyzing media is a quirky pastime Jordan has turned into a passionate hobby.