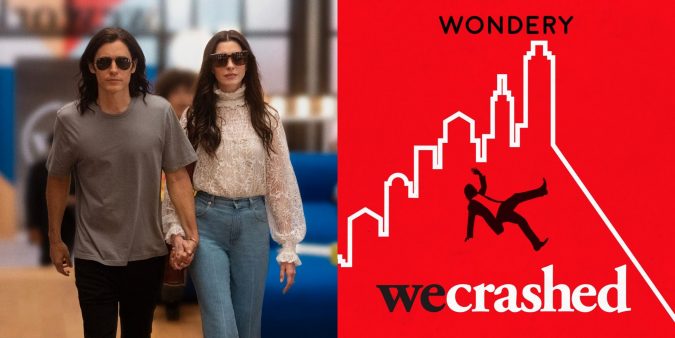 The new Apple TV+ show WeCrashed is a glossy, dramatized retelling of the infamous story of WeWork, an extremely well-funded coworking space startup that lost billions of dollars of investors’ money. The show was inspired by a Wondery podcast of the same name, a factual rendering of the WeWork story filled with expert interviews and audio clips from the people who were there.

Now in its second season, WeCrashed: The Companion Podcast, releases an installment to supplement each new episode of the Apple TV+ show.  Host Scott Galloway breaks down each episode with insightful commentary, more expert interviews, and even more behind-the-scenes information about the biggest rise and fall in startup history.

WeWork cofounder Adam Neumann’s most profitable strength was his ability to speak charismatically and convincingly.  The show creators said they wanted to give the characters, including Adam and Rebekah, their real voices, so they sourced many of the characters’ lines from real-life recordings and statements.

Many of these iconic statements are replayed throughout the podcast.  On their first date, Rebekah, played by The Princess Diaries star Anne Hathaway, says “You, my friend, are full of shit” to Neumann. The show creators pulled this statement from a college commencement speech that Neumann gave at Baruch College.

Entrepreneurs Are Salespeople By Necessity

As viewers see headlines about Adam, Rebekah, and the other people driving WeWork’s unsustainable growth, it’s easy to villainize them as swindlers or grifters.  But according to the WeCrashed: The Companion Podcast’s second-season host, NYU business professor Scott Galloway, salesmanship is essential to entrepreneurs.

That’s not to imply that Galloway is exactly sympathetic to WeWork’s situation.  In fact, he was an early critic of WeWork’s business model and had even written a blog post entitled “WeWork WTF” about the holes he saw in their plan.  But as an entrepreneur himself, he does mention that selling the idea of a founder and business is a large part of what entrepreneurs do, and therefore isn’t necessarily a problem.

Galloway Is In The Show

In a very meta turn, Scott Galloway, is played by Billions actor, Kelly AuCoin, on WeCrashed.  Galloway’s first scene is in the second episode at the JP Morgan conference, as he interviews a bare-footed Adam Neumann in front of some of the world’s wealthiest investors.

Show co-creators Lee Eisenberg and Drew Crevello were interviewed in the first episode of the podcast, and Galloway asked them why he was included in the show.  They said that Galloway’s critical blog post about WeWork was a “the Emperor has no clothes moment” for them, meaning that Galloway opened their eyes to the impending doom of WeWork, eventually inspiring this show.

The Neumanns’ Love Story Was Integral To WeWork

WeCrashed co-creators Lee Eisenberg and Drew Crevello said that the Neumanns’ relationship was not only vital to WeWork’s origin, but that it also helps differentiate their story from other failed startups.

It’s clear from the very beginning that Neumann’s sales skills as a serial entrepreneur are formidable, but he hadn’t yet found success with the products he was selling.  It wasn’t until Rebekah told him to make a business from his happiest feeling, the sense of community he had in a kibbutz, that the idea of WeWork came about.

Galloway interviewed Lizzie Widdicombe, a New Yorker staff writer, who compared the fervor among WeWork employees to members of a cult.  She points out that WeWork exhibited many of the core elements of powerful cults, including a charismatic leader and members disregarding reality for the fantastical principles of said leader.

Widdicombe credits this break from reality to a gradual process wherein WeWork employees rationalized a mass delusion partly because startups funded by venture capital seemed to defy prior notions of profitability in businesses and partly because the lavish, partying culture also presented a new reality compared to other offices.

According to New Yorker journalist Charles Duhigg, Adam Neumann constantly sought father figures throughout his life and found a couple in his main investors, Bruce Dunlevie of Benchmark Capital and Masayoshi “Masa” Son of Softbank, played by Train to Busan actor Eui-sung Kim. Neumann’s own father was absent for much of his childhood, likely influencing Neumann’s desire for a father figure.

In the podcast, Duhigg compares Dunlevie to a “tough love” dad, pointing out that Dunlevie even keeps a pediatric psychology textbook on his desk to help him guide founders as if they were his children.

The Big Parties And Heavy Drinking Were Non-Negotiable

Some of the most famous perks of WeWork employment was the partying in the workplace, punctuated by huge, weekend-long parties called “Summer Camp.” According to New Yorker staff writer Lizzie Widdicombe, WeWork employees were required to attend the all-expenses-paid, heavily intoxicated parties

Although the commitment to fun might seem like a benefit, viewers learned that many of the women employed by WeWork were disgusted and marginalized by this culture.

WeWork Did Not Disrupt Misogyny

WeWork’s claim to fame was its ability to change not only the real estate market but the concept of work in general.  However, despite insisting to both tenants and investors that WeWork would usher in a revolutionary era of better business practices, the company replicated much of the misogyny of workplaces it claimed to disrupt.

According to New Yorker staff writer Lizzie Widdicombe, WeWork was led by a “macho” man, and like many startups, encouraged toxic management techniques to meet aggressive growth metrics.  This empowered managers to bully employees, much like co-founder Adam Neumann’s own management techniques.

Neumann Had An Abnormally Large Amount of Control Over WeWork

It would take a special intervention by WeWork’s board of directors to remove Adam Neumann from the helm, as seen in the first episode of WeCrashed.  That’s because Neumann’s WeWork stocks were a special type of share that granted him extra voting power within the company.

According to New Yorker journalist Charles Duhigg, Neumann was able to acquire this extra power because WeWork stock was in such high demand at some point, that Neumann could dictate that only investors who would give him such power were allowed to purchase shares.  This insulated Neumann from most forms of corporate oversight.

Masayoshi “Masa” Son, the CEO of Softbank, was WeWork’s largest single investor, investing more than $4.4 billion into WeWork.  He is still a powerful entrepreneur and investor to this day, but according to New Yorker journalist Charles Duhigg, he is not the savviest businessman, but rather a prolific gambler.

In the 1990s and 2000s, Son had invested and lost millions of dollars on a variety of tech companies, but then made even more than he lost with just one company, the e-commerce site Ali Baba. By the time he met Adam Neumann, Son had resolved to bet early and often, leading to the ultimately unsuccessful investment in WeWork.