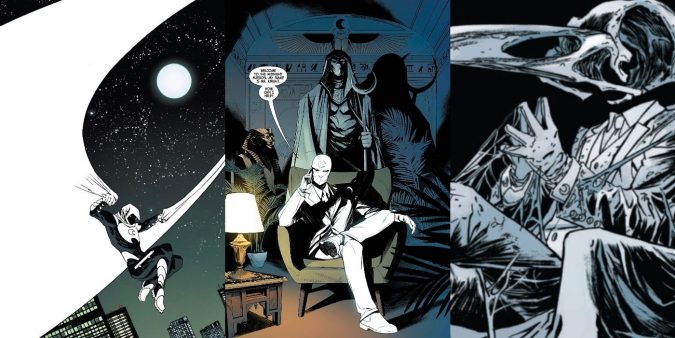 Once Disney and Marvel Studios revealed a portion of their plans post-Infinity Saga, Moon Knight was announced to be one of the Disney+ TV shows to expand the overall MCU. Oscar Isaac stars as the titular superhero the series has opened to a strong reception and has the potential to be one of the boldest properties this cinematic universe puts to screen given the action and Marc Spector/Moon Knight’s characteristics.

RELATED: The 10 Daredevil Comic Books That Most Influenced The Netflix Show

He’s a darker and much more psychologically complex character than the MCU has typically shown and is also associated with supernatural elements. The comics have been good to him, as Moon Knight has had several talented writers and artists put together some engrossing stories that made for some memorable visuals and moments.

Updated on April 5th, 2022 by Guillermo Kurten: The best Moon Knight comic panels should be of great interest to fans of the Disney+ series as they show just how iconic this underrated Marvel character can be. Now is a great time to revisit some of Moon Knight’s biggest moments from the original comics.

Though Moon Knight is one of the more niche characters in the superhero genre, his Marvel Comics history dates back to the Bronze Age of comics. The Fist of Khonshu’s first appearance came in someone else’s main series, in this case, Werewolf by Night issue #32 in 1975.

The nocturnal vigilante was created by Doug Moench and Don Perlin, and his comic book debut came in a story where Moon Knight was hired to hunt down and bring in the Werewolf by Night alive. This cover by Gil Kane is a gritty and nostalgic throwback to a classic era in the medium, and one where Marvel was going all-in on monster-themed stories. Coincidentally, Werewolf by Night is set to be a Halloween special on Disney+ this year. This has fans speculating on a potential adaptation of the Midnight Sons superhero team.

It’s one of the most entertaining panels, and it takes place in Matthew Rosenberg and Szymon Kudranski’s run on The Punisher. Issue #14, Baron Helmut Zero and the supervillain team Thunderbolts take their fight against Frank Castle to Manhatten–some of the most powerful characters Punisher would have to fight–and Black Widow tries to get together a team to help him. It’s the third to last issue in the War on the Streets arc, but he doesn’t take too kindly toward working in a team.

Moon Knight is one of the few who answered Natasha’s call and an entertaining bit of banter between him and the Punisher follows. Frank mocks the “imaginary god” that Marc follows, with the latter going for a particularly low blow. The character doesn’t necessarily slot into the “comedy” genre, but even he can provide some form of comedic relief. It’s a fun showcase of how Moon Knight can occasionally be morbidly funny.

Most recently, Marvel took to launching the first new run of Moon Knight since the 2017 series now with writer Jed MacKay and artist Alessandro Cappuccio. The timing seems right with the Disney+ series coming next year, and the critical consensus for the new comic book has been resoundingly positive so far. It continues exploring one of the fundamentals of the character in the form of his struggles with crimefighting while handling his personas forming his disassociative identity disorder.

RELATED: 10 Comic Characters That Should Join The MCU’s Thunderbolts

Despite overcoming and rejecting the cruel Khonshu, Marc Spector continues the work without the Moon-god as Moon Knight and the sleek Mr. Knight persona with his Midnight Mission congregation. It’s a new expansion of the character’s mythos, but Cappuccio’s striking and clean artwork of the superhero welcoming a client into the Midnight Mission is already panel to remember, despite being so new.

Jeff Lemire and Greg Smallwood’s acclaimed run on Moon Knight received the praises it did partly for how engrossingly introspective it was with its protagonist. It’s a satisfying story for longtime fans as well as being a good starting point for newcomers, with its POV-driven storytelling putting readers in the disorienting shows of Marc Spector.

He’s led to believe he’s locked in a poorly-run mental hospital, but there are always more layers to stories with Moon Knight involved. The Mr. Knight persona has become a fan-favorite look in the hero’s more recent years and seeing Smallwood’s stylish art of him suiting back up is satisfying on both a visual and thematic front.

The basis for Marc Spector’s superhero persona as Moon Knight was being rescued from death by the Egyptian Moon god Khonshu after being left to die as a mercenary in the desert. For a long time, Spector used this superhero identity to serve as Khonshu’s fist, helping enact justice for those looking to travel by the night. The supernatural and occult elements associated with him also seem like things the MCU will explore with their Disney+ Halloween Special on top of (presumably) Moon Knight.

Loyally serving an eerie god while struggling to come to terms with his psychological turmoil make for some dark, but fascinating commentary. Lemire and Smallwood came in their run on Moon Knight to give some of the most haunting renditions of Khonshu. The ominous bird skeleton wearing formal attire gives off a horror-like atmosphere, and panels like these mixed with the gritty art style drive that feeling home, especially in scenes when Spector meets with him.

Most of the funny Moon Knight-related comic book panels circulating the internet are photoshopped to be as bombastic as they are, but Khonshu’s Avatar does have some sense of humor. Gerry Duggan’s run on the Infinity Wars series saw Gamora kill her father and take over his quest for the Infinity Stones, adopting the new name Requiem.

Someone of her power becoming a villain certainly qualifies as an Avengers-level threat, and even non-Avengers like Moon Knight tagged along. Mike Deodato Jr.’s panel in issue #3 is a genuinely funny moment between him and the famously witty Spider-Man, with Moon Knight spacing out and completely lost at the cosmic nonsense that the rest of the Marvel heroes deal with.

Nine issues in, and Jed Mackay’s current run on Moon Knight remains as critically praised as it started. Following this new quest in Marc’s post-Khonshu life has provided several memorable panels, and big thanks would go to the aforementioned Alessandro Capuccio’s sleek, stylized artwork.

This run took even more of a turn to the supernatural, perhaps to coincide with the Disney+ series, with Moon Knight hunting down threats like vampires to protect those who look to travel by night. This impact panel by and large speaks for itself, with the composed vigilante making an emphatic entrance by crashing some vampires’ car — and their night.

Moon Knight’s characteristics, themes, and tones of his stories make him one of the darker Marvel comic book characters like Daredevil but takes more brazen approaches to crimefighting. For instance, he doesn’t care much for sneaking up on the villains he targets. Rather, he relishes the thrill of the fear he inflicts on them, which is a testament to his Moon Knight suit–including Mr. Knight.

The stark, nearly blinding white of his costume is done to announce his arrival. Given that mindset, Shalvey and Bellaire once again provide beautiful imagery with their panel of the hero soaring across the page in a wonderfully massive and exaggerated cape taking the shape of the crescent moon, with the actual moon further up. The art gives an ethereal quality to it that’s fitting of the nocturnal character.

Lemire and Smallwood’s run finishes in an emotionally satisfying fashion, cementing its status as one of the hero’s best comic book runs. This story arc culminated in a major confrontation between all of Moon Knight’s identities and Khonshu. The Egyptian Moon deity has lorded over Marc Spector, appointing him as his fist and high priest, and commanding his devotion.

Issue #14 was the final one in this series and represented a fantastic close to Moon Knight’s character arc here, as he realizes that having such blind faith in this god that doesn’t care for him will only hurt him more, accepting himself and growing as a person–or people. It’s a landmark scene and set of panels for Moon Knight, and one that fans will likely hope becomes just as pivotal in the Disney+ series. Smallwood’s art also does well in conveying a grounded, noir-like style akin to Batman’s origin story in Year One illustrated by David Mazzucchelli.

After the soul-searching events of the Lemire and Smallwood run, writer Max Bemis and artist Ty Templeton’s run on the series throws another batch of villains at him. It’s the introduction of the Sun King, a mysterious villain named The Truth, and his original nemesis Bushman who initially murdered Marc in Egypt.

RELATED: 6 Villains That Could Appear In Penguin’s HBO Spinoff Of The Batman

The story arc is another wild psychological rollercoaster, but it made for another funny and lighthearted moment in the process. Marc tries out meditation in the park to try and get control over his personality, however, it resulted in some publicly rocky effects.

“You Must Know You Have A Weak Mind, Marc?” – Moon Knight (Jeff Lemire)

The popular consensus among fans seems to be that Jeff Lemire and Greg Smallwood (and again colorist Jordie Bellaire) had the best run on the character’s comics. It’s a story arc that gets incredibly intimate and introspective with Marc Spector, his inner fight to live with his fractured mind, and the state of his relationship with this harsh, callous moon god that anointed him as his knight.

The panels illustrated where Khonshu talks down condescendingly to Spector are so powerful for the tone it sets. By having each panel being shown from the first-person perspective and coupled with Smallwood’s pencils and Bellaire’s colors, it sets a dark, oppressive atmosphere demonstrating that, at this moment, Spector is effectively at the whim of Khonshu. It’s brutal but makes the finale of this series all the more cathartic.

NEXT: 9 Best Doctor Strange Comic Issues Of The 2000s