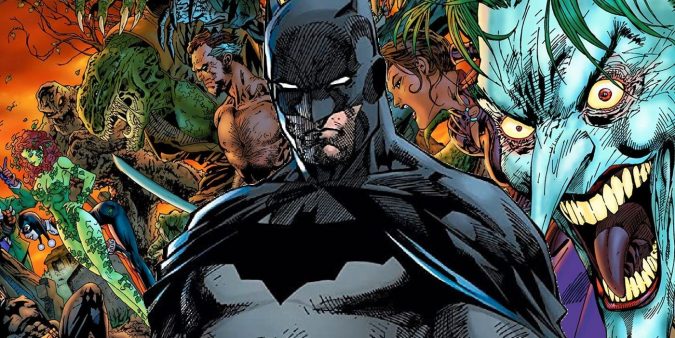 Batman never sees his villains as “villains,” but instead victims with trauma. As such, he’s no different as a victim in his own right.

For most superheroes, supervillains are merely dangers to society who need to be stopped by any means necessary, but Batman sees things a bit differently in DC Comics. Case in point, prior to the events of Justice League #33 by Geoff Johns and Doug Mahnke, Jessica Cruz is unwillingly chosen by The Ring of Volthoom to become the next Green Lantern, but because the ring forced itself onto her, it also took over her body. Under its control, Jessica wreaks havoc over her town with the League struggling to calm her down.

At one point, JLA member Lex Luthor had a plan to essentially fry her brain, but Batman intervened simply by talking to her and relating to her traumas. In his own words, Batman identified himself as a “victim” like Jessica who was “afraid of the darkness out there.” He spoke on finding the strength to face his fears, convincing Jessica that she was “tired of being afraid.” That was enough to help the latest Green Lantern calm down long enough to neutralize the situation.

Related: Superman’s Impression of The ‘Batman Voice’ is Shockingly Effective

This is the kind of behavior that separates Batman from the average hero and what makes him so good at his job. He recognizes that his villains are more than just villains–they’re victims, just like how he was a victim the night when he watched his parents get murdered in Crime Alley. Understanding that his villains are merely people with trauma who need extra guidance is Batman’s biggest strength.

This is a strength that separates Batman from most of his peers. Not just from a JLA infiltrator like the villainous Lex Luthor, but even the League’s most noble members like Superman and Wonder Woman. What separates Batman from most of his peers is that before he even became a superhero, he witnessed trauma firsthand. He understands just how easily he could have become a villain in his own right had he been steered down the wrong path. Now, as Batman, he seeks to offer that same guiding light to fellow victims like Jessica.

In comics, Batman not only understands victimhood, he knows how to get onto the other side of trauma: recovery. Understanding this adds another layer as to why he isn’t harsher on his villains, namely why he doesn’t kill them, in regards to repeat offenders like The Joker, for example. This is a common criticism from audiences that stirs a debate that likely will never end. But those same critics must understand that with victims of trauma, regardless of how engulfed by the evil they’ve become, the key to getting through to them isn’t to punch them in the face or fry their brains. More often than not, Batman’s villains need empathy and compassion to truly change. Not everyone, not even heroes, understand that, but Batman does and his methods are all the better for it.

Next: Batman is Officially A Dragon-Rider in DC’s Dark Knights of Steel

Joe Anthony Myrick is a writer for Screen Rant. Since first beginning his career as a professional writer after graduating with a B.A. in English studies, Myrick (or JAM) has spent much of his time under the Valnet umbrella for sites like TheRichest and TheTravel. Now, a seasoned veteran of his practice, JAM dedicates his expertise to the Comics column of Screen Rant.

Previously, he served as a head editor for Daily DDT and Under the Laces for FanSided. In addition, he serves as a writing teacher in his spare time.