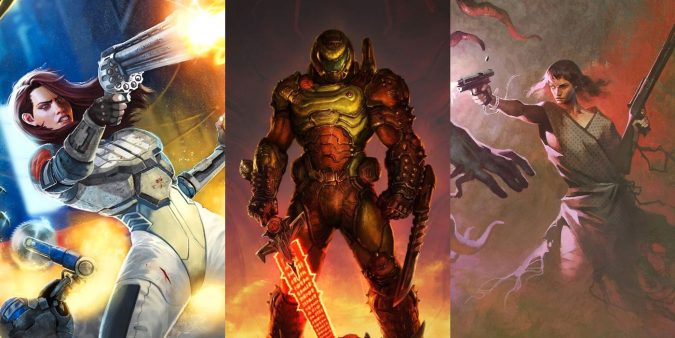 In the early 2010s, brown-and-gray military shooters were all the rage, and franchises such as Call of Duty and Battlefield reigned supreme. While Activision’s famous first-person shooter series hasn’t fallen off, the style of shooter that it helped to popularize certainly has. In its wake came a 90s FPS revival celebrating the iconic classics which pioneered the genre such as Doom, Quake, and Wolfenstein.

RELATED: 10 Canceled Games We Wish We Could Play

Ditching iron sights and cover shooting mechanics in favor of ridiculous weaponry and circle-strafing, so-called boomer shooters are huge at the moment, particularly in the indie space, and these are a few of the very best.

Originally titled Ion Maiden before the heavy metal group Iron Maiden threatened to take legal action against potential infringement, Ion Fury is a 2.5D first-person shooter developed on the Build Engine, the same seminal system on which titles such as Duke Nukem 3D and Shadow Warrior were created.

Distinctly Duke right down to the cheesy quips and devastating weaponry, Ion Fury is a love letter to those who cut their teeth on FPS games originally released for DoS. Replete with silly references to 90s pop culture, Ion Fury feels as it if should have shipped on a set of three-and-a-half-inch inch floppy discs in 1996.

In 2014, Machine Games and Bethesda revived the Wolfenstein franchise following a five-year hiatus with Wolfenstein: The New Order. While it maintained some of the run-and-gun gameplay elements seen in the 1992 early FPS staple, The New Order placed a much heavier emphasis on story and reintroduced the stealth elements originally seen in the 1981 Apple II original.

The Old Blood, a standalone prequel that released the following year, was much zanier, leaned even more heavily into the occult elements seen in Wolfenstein 3D’s later stages, and returned non-stop shooting to the gameplay forefront.

The pixel art aesthetic tends to be a bit overused in the modern indie game space; everything from Stardew Valley to Blasphemous and World of Horror cribs the look to further sell a throwback feel. While Project Warlock is certainly guilty of this, the game’s nonstop action and rigid adherence to pre-1998 FPS design philosophy make it a worthwhile experience for seasoned genre vets.

RELATED: 10 Books About Gaming History That Gamers Will Love

Project Warlock’s levels don’t feature much verticality, calling to mind early shooters like Wolfenstein 3D. That said, with a great variety of weapons and a light RPG system that helps spice up the gameplay, the title is absolutely worth the time of those who enjoy the genre.

The third in a series of games that revived the long-dormant Shadow Warrior franchise, Shadow Warrior 3 debuted in March 2022 to mixed reviews. While fans praised the shooting mechanics and compared the title to the recent DOOM duology, many bashed the game’s notable brevity.

While it’s certainly burdened by a few shortcomings, the gravity-defying, circle-strafing mayhem of Shadow Warrior 3 should not be missed. While its current asking price of fifty dollars may be a bit too much, eager fans can go back and check out the first two Shadow Warrior reboot titles or even re-experience the original, which is available on Steam.

Originally launched on PC in 2019 and re-branded in 2021, Splitgate is a crossplay FPS title that deliberately draws from old-school arena multiplayer FPS titles like Quake 3 Arena and Unreal Tournament. The catch, however, is that it allows players to create two-way portals straight out of Valve’s Portal franchise, and it adds a new dimension to the classic deathmatch gameplay.

One of the very few multiplayer first-person shooter titles to include crossplay between consoles and PC, Splitgate is a unique experience that feels as if it contains DNA from shooting games spanning the 90s and 2000s. Old-school Quake fans and hardened Halo gamers alike should feel right at home here.

Released in Early Access in late 2020, Prodeus is a throwback shooter which walks the line between super-polished Doom mod and fully 3D shooter akin to the newer Doom titles. Touting a very unique visual style and classic, frenzied shooting, Prodeus manages to stand out amid a sea of similar indie and AA titles.

With shooting mechanics that may remind players of Duke Nukem 3D and a HUD and environmental design that seem to take inspiration from the Metroid Prime games, Prodeus is a one-of-a-kind title, and retro FPS fans are doubtlessly clamoring for the full release.

While retro-inspired roguelike games with throwback pixel art aesthetics have been done to absolute death in recent years, Nightmare Reaper stands out in a genre overcrowded with competitors. A brutal Doom-inspired FPS title featuring randomly-generated levels, Nightmare Reaper is threaded together with a memorable narrative and a set of genre-defying minigames that are almost as captivating as the main experience.

Frantic and unrelentingly weird, Nightmare Reaper may not seem like a game for everyone, but, with overwhelmingly positive reviews from players on Steam, it’s obvious that Blazing Bit Games’ first foray into the genre managed to impress.

While much of the retro FPS revival has focused on classic Id Software titles of the 90s, Amid Evil instead bases its gameplay and level designs on Raven Software’s Heretic and Hexen. Far removed from the plasma rifles and space marines of Doom, these games focused on dark fantasy settings and employed weapons such as energy staffs and magic-imbued axes and swords.

RELATED: 10 Best Multiplayer Horror Games For Your Next Halloween Party

Released in 2019, Amid Evil was a solid reminder that old-school first-person shooters didn’t revolve entirely around lead-slinging firearms, and even those who missed out on the games on which it was inspired may want to give this one a shot.

Doubling down on the nonstop demon-destroying mayhem that was 2016’s DOOM, the 2020 sequel further fleshed out the already great FPS gameplay, introducing a slew of new weapons, enemies, environments, and mechanics to ensure that ripping and tearing through the hordes of hell never gets old.

While DOOM 2016 was famously focused on gameplay instead of story, DOOM Eternal places more of an emphasis on narrative and fills out the hereto fairly ambiguous lore of the Doom Slayer, connecting the title to other installments in the longrunning franchise.

Dusk is quite possibly the most celebrated indie retro shooter to release in the past decade. A love letter to the original Quake, Dusk cops that game’s chunky early 3D graphics and Lovecraftian horror aesthetic and offers up a refined experience that’s arguably even better than its aged inspiration.

Quake was an undeniable trendsetter, but its bland hallways and gruff visuals came across as fairly one-note. Dusk, on the other hand, enhances everything which made that game worthwhile, offering up one of the most compelling shooter experiences on Steam at the moment.

2023 Is A Big Year For Video Game Sequels