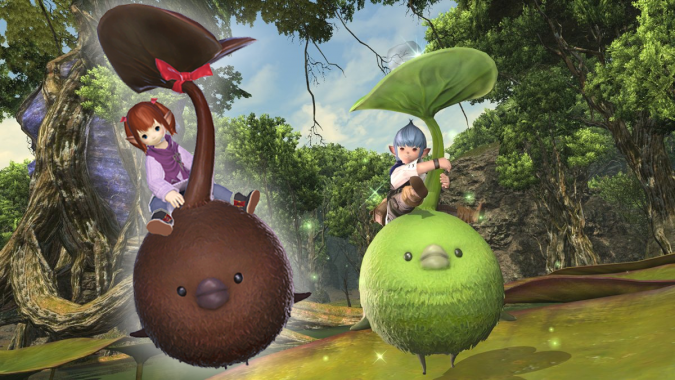 The FFXIV Butterfinger crossover shouldn’t have surprised anyone. Video games and snack food have danced together since long before someone thought to slap Mario on a cereal box. Even so, people to this day seem to stumble upon the mix of chocolate and Final Fantasy XIV goodness. It was a strangely big deal when the promotion hit North America in 2021. Maybe it was Endwalker hype! Maybe people just really wanted an excuse to buy Butterfinger (a candy bar I have personally avoided since it tried to destroy my teeth several Halloweens in a row as a child). Whatever the exact cause, it’s clear everyone entering the promotion wanted the “free” Chocorpokkur mount that came with it. But can still get the FFXIV Butterfinger Chocorpokkur mount today? Well, the answer is complicated…

The short version is that the FFXIV Butterfinger event is over. The promotion ended on June 30, 2021 and the website where you could even enter the promotion has long since been taken down. Before that point, you could spend a minimum of $5 on Butterfinger branded products and send a picture of your receipt to the candy company. They would then send you a code for the digital mount: a chocolate-colored creature called the Chocorpokkur.

The reason this gets complicated is twofold. You can probably guess the first issue. Players and scalpers naturally found ways to scoop up Chocorpokkur codes to sell secondhand. You can find them now on eBay and other auction sites. They’re typically listed between $20-30, with some very ambitious sellers asking for $150 or more. We’re not going to link them here since we can’t confirm the reputation or scruples of any one seller (and you can certainly find the listings yourself with a search engine).

Another thing that slightly complicates things is that the Chocorpokkur wasn’t actually a Butterfinger promotion. It actually started with a Japanese chocolate company, called Lawson, well before. Butterfinger simply carried the torch here in the west. This actually explains why the “Butterfinger mount” isn’t very Butterfinger-y. It’s just a pure, brown mount. Specifically, it’s a variant of the Korpokkur Kolossus — which usually comes in light green.

The Korpokkur Kolossus is still available in FFXIV. You can buy it from the Gold Saucer (a.k.a. the casino found in Thanalan) for 750,000 MGP. That’s a hefty sum, of course. Not a lot of players regularly do the Fashion Report, Triple Triad, or other mini-games necessary to acquire the special currency. Buying Butterfinger was weirdly a much easier way to acquire an almost identical mount with zero grind. No wonder people were interested! This also means you can at least get a nearly identical version of the Butterfinger mount in-game to this day.

Seeing as the mount was never a Butterfinger candy exclusive, too, it’s quite possible that Square Enix will bring back the Chocorpokkur in a future event. The developer usually waits a good, long time before making promotional or time-limited items available through other means. But it has most certainly switched to selling items in the Mog Station directly. The team also sometimes turns old cosmetic items into rewards for Moogle Tomestone events. These events encourage players to repeatedly run old content, helping newer folks catch up on multiplayer duties right before most major patches.

This last bit is of course total speculation. It’s totally possible the so-called Butterfinger FFXIV mount will never be available again. At least not without turning to third-party sellers. There’s at least a small glimmer of hope, however. Not to mention the virtual creature that started it all is still available in-game for those brave enough to grind MGP. Best of luck, either way!