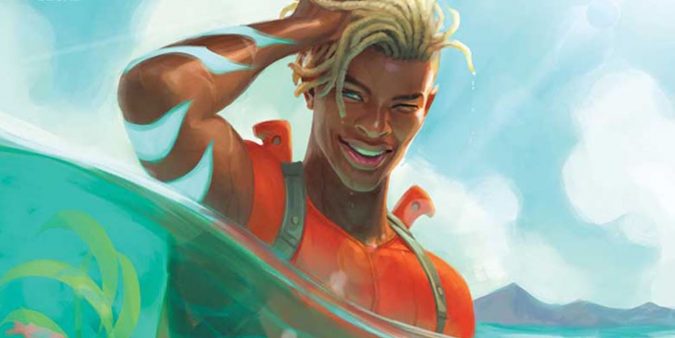 Mad Max: Fury Road star Charlize Theron is set to produce an Aqualad series for HBO Max, based on the 2020 YA graphic novel, You Brought Me the Ocean.

Aqualad is set to get his own series for HBO Max with Charlize Theron on board to produce. Many different heroes have taken on the mantle of Aqualad in the comics, but the most famous recently has been Jackson Hyde, who was introduced in Brightest Day #4 in 2010 and was inspired by the then-upcoming Young Justice series, which was set to introduce a new Aqualad, Kaldur’ahm. Both Aqualad and Kaldur’ahm have become major players in the DC Universe, and both characters are prominent LGBTQ+ superheroes.

The character is set to make the leap to live-action, as according to Variety, HBO Max is developing a series based on the 2020 YA graphic novel, You Brought Me the Ocean, from author Alex Sanchez and artist Julie Maroh. The series will focus on the Jackson Hyde incarnation of Aqualad, a gay teenager who is looking to escape his desert life in New Mexico for the Ocean and falls in love with his high school swim captain. Described as a dramedy, no writers are attached to the project at this point, but Mad Max: Fury Road star Charlize Theron is set to produce the series.

There’s been no word yet on if this will be a standalone project in the DC multiverse like other HBO Max series, Doom Patrol and Titans, or if the plan is to make the series part of the DCEU and set up Aqualad for future adventures alongside Jason Mamoa as Aquaman, following Aquaman and the Lost Kingdom. The introduction of Aqualad does come along when DC also has projects developing for other young superheroes like Batgirl, Blue Beetle, and Static Shock, which indicates Warner Bros. and HBO may have plans for a team of young heroes. It is apparent, though, with the Colin Farrell Penguin series, Peacemaker, and the upcoming Green Lantern series, that HBO Max has big, long-term plans for the DC brand. With the recent controversy surrounding the controversial “Don’t Say Gay” Bill in Florida and the controversy with Disney, it is refreshing to see Warner Bros. invest in an LGBTQ+ lead superhero project.

Next: Aquaman 2 Should Introduce Aqualad To Improve Manta’s DCEU Story

Richard Fink is a news writer for Screen Rant. He graduated from Arizona State University in 2016 with a degree in Film and Media Production. He loves the finer things in life, like cold Diet Coke on a hot summer day. Richard is a fan of all things Star Wars, Marvel, DC, and Film History.