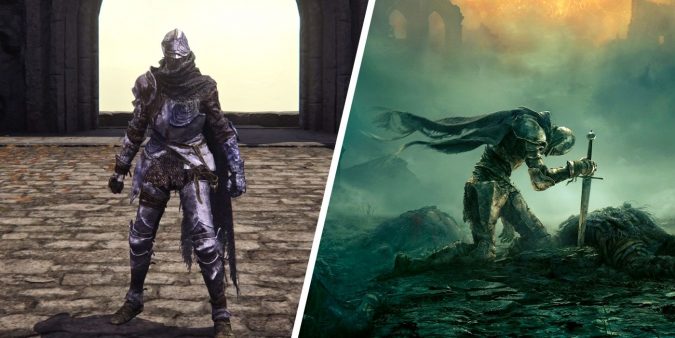 To get the Fingerprint Set in Elden Ring, players must defeat the Tarnished boss of an Evergaol in the Mountaintops of the Giants region.

One unique armor set that every Elden Ring fan will have undoubtedly seen is the iconic Fingerprint Set, the attire of the kneeling knight on the game’s main cover art. As one of the three “poster” armor sets of Elden Ring, each armor piece of the outfit is thematically and visually well-designed, emitting an extraordinary sense of quality. In addition, the Fingerprint Set in Elden Ring offers high protection at a relatively low Equip Load cost and serviceable resistances, excluding high Robustness.

To get the Fingerprint Set in Elden Ring, adventurers must find and defeat Roundtable Knight Vyke, the Tarnished Boss of the Lord Contender’s Evergaol in the Mountaintops of the Giants. Those who’ve explored the northeastern mountains of Liurnia will have encountered this character before as an Invader known as Festering Fingerprint Vyke. This enemy is equipped with Frenzied Flame Incantations and a spear that can inflict Madness buildup. However, the Evergaol variant of this NPC is much more challenging and deadly to fight.

Related: Elden Ring: How To Get The Fingerprint Stone Shield

The Lord Contender’s Evergaol is located on a slope near the start of the Whiteridge Road in the Mountaintops of the Giants region. To reach this location, Tarnished travelers must pass through the Forbidden Lands after defeating Morgott of Leyndell and make their way to the large Freezing Lake in the northeast. Then, being cautious of the lake’s Dragon guardian, Borealis the Freezing Fog, ride towards the southwest to find the Vyke’s Evergaol. Alternatively, Tarnished adventurers can go west from the First Church of Marika and use the Spiritspring Jump near the ridge to get to the boss arena.

Where To Find The Fingerprint Set in Elden Ring

To defeat Roundtable Knight Vyke and acquire his Fingerprint Set in Elden Ring, players must understand the general mechanics of this boss to take him down. First, Vyke will always begin the fight by casting Vyke’s Dragonbolt and continuing to cast it throughout the duration of the battle. This Incantation will imbue his spear with devastating Lightning damage but ironically make him more vulnerable to Lighting-related attacks. Next, keep in mind that he hardly two-hands his armament in Elden Ring, meaning that the best way to avoid his pokes and stabs is by rolling to his left, the player’s right.

The primary attack Tarnished must avoid at all costs is Vyke’s jumping strike. This ability can potentially stagger and penetrate through their armor, resulting in players getting one-shotted. He has low Poise, making him highly vulnerable to any weapon art or ability that can stagger him. Furthermore, he can be easily punished when casting Vyke’s Dragonbolt or executing a failed spear poke from a distance. Nonetheless, one way to end the fight instantly is by casting Inescapable Frenzy as soon as he spawns from the ground. As a Tarnished, Vyke can be inflicted and killed with Madness-related Spells. Yet, the timing can be tricky and may take several attempts. Once Roundtable Knight Vyke has been slain, players will receive the Fingerprint Set in Elden Ring.

Elden Ring: Why The Tarnished Changes After Meeting The Three Fingers