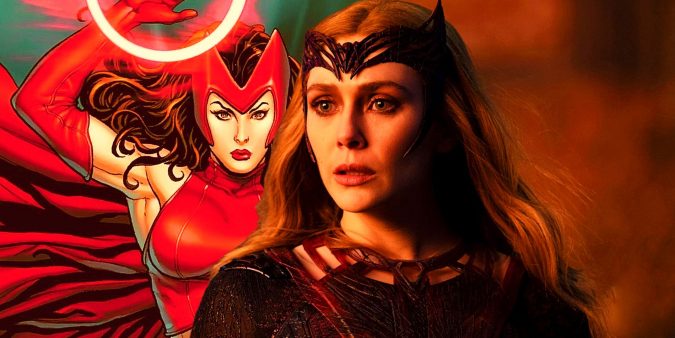 Elizabeth Olsen reacts to the X-Men potentially appearing in the MCU, while saying the decision is ultimately up to Marvel Studios CEO Kevin Feige.

Warning: Spoilers for Doctor Strange in the Multiverse of Madness.

Elizabeth Olsen talks about the X-Men potentially appearing in the MCU, saying the decision depends on Marvel Studios CEO Kevin Feige. Olsen recently reprised her role as Scarlet Witch in Doctor Strange in the Multiverse of Madness and last year received an Emmy nomination for her lead performance as the character in WandaVision. Outside of the MCU, she’s known for her parts in 2014’s Godzilla, Wind River, and Ingrid Goes West.

X-Men follows a team of superheroes who have unique genetic traits that give them superhuman abilities. The X-Men film series, which includes movies like X-Men, Deadpool, and Logan, ran for 20 years after the name and characters were licensed to 20th Century Fox by Marvel. Marvel Studios then obtained the rights in 2019 after Disney acquired Fox, concluding the series with The New Mutants in 2020, leaving the door open for the characters to appear in the MCU.

Related: Do The X-Men Exist In The Avengers Universe After Doctor Strange 2?

In an interview with HollywoodLife, Olsen expressed interest in playing Scarlet Witch in a new X-Men movie since the character was a big part of that team in the comics. She says it’s up to Feige to figure out if and how the characters should be added to the MCU’s already massive roster. Olsen also doesn’t rule out the possibility of a stand-alone Scarlet Witch movie, with that project being a good jumping-off point to bring in more X-Men. Read Olsen’s quote below:

I mean, apparently we’re bringing in the X-Men, and she’s part of that franchise, so where is Kevin Feige in here?

After the acquisition, Feige made the announcement that the X-Men will eventually be added to the MCU. Feige has also previously said that the MCU’s take on the X-Men will be very different from the Fox series of films. However, no concrete plans have been announced for standalone movies or which characters the franchise will focus on. The only two exceptions to this are Deadpool 3, which is currently in development at Marvel Studios, and Charles Xavier (Patrick Stewart), who recently appeared in Doctor Strange in the Multiverse of Madness.

With Marvel Studios acquiring the rights to X-Men, it isn’t a surprise that the MCU will bring in the characters at some point in time, and given the ridiculously high returns every MCU film gets, the franchise clearly has the time and resources to bring in the team whenever they choose. The MCU seems too big to fail at this point, and it seems every decision Feige makes will bring them more success, and bringing in characters that filmgoers already recognize will make it an even easier decision to make. Olsen could be the face of new X-Men films, but fans will have to just wait and see.

Warren Elliott is a freelance entertainment writer newly working for Screen Rant. They graduated from Virginia Commonwealth University in 2020 with a degree in English and Creative Writing.