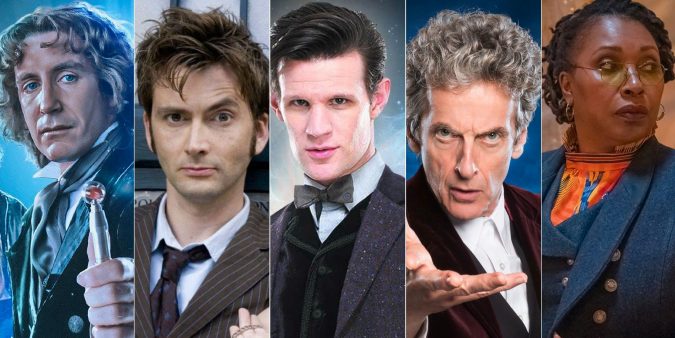 Who should receive an invitation to Doctor Who’s 60th anniversary special in 2023? Doctor Who finds itself in need of regeneration as its 60th birthday bash beckons. Despite widespread praise for Jodie Whittaker as the Thirteenth Doctor, Chris Chibnall’s tenure as Doctor Who showrunner started divisively, and only compounded those criticisms with Doctor Who: Flux, which failed to answer its big questions, felt burdened by unnecessarily complicated exposition, and left too many lingering plot holes. Whittaker and Chibnall will both step down in 2022, and Russell T. Davies begins his second stint as showrunner with the 60th anniversary special in 2023.

That behind-the-scenes reshuffle leaves Doctor Who’s 60th anniversary something of a conundrum: the episode won’t have an established current Doctor. If Chibnall’s final episode ends on Thirteen’s regeneration and Davies’ first day on the job is Doctor Who’s 60th shindig, the Fourteenth Doctor’s full debut will coincide with the big birthday celebrations. Alternatively, RTD might save the Fourteenth Doctor for season 14, and do something completely different for the 60th anniversary. Either way, the story will be relying heavily on established returnees.

Doctor Who’s 60th anniversary must feel distinct from last decade’s “The Day of the Doctor,” and any returnees would need to make sense in both canon and narrative terms. Representation from the entire spectrum of Doctor Who eras is also a necessity. With this in mind, which Doctors and companions should receive an invitation to the party?

Though “The Day of the Doctor” makes a strong case, 1983’s “The Five Doctors” is arguably Doctor Who’s greatest crossover. And with Jodie Whittaker representing regeneration no. 5 since Doctor Who restarted, Russell T. Davies’ 60th anniversary has the potential to be a modern “Five Doctors.” Alas, Christopher Eccleston already effectively ruled himself out of contention, and Whittaker would’ve exited only one episode prior, so Peter Capaldi’s Twelfth Doctor feels like the strongest linchpin for this 60th anniversary lineup. As a Moffat-era Doctor, it’d be fascinating to see Capaldi working from a Russell T. Davies script, and after his eyebrows made it into 2013’s special, it’s high time the Twelfth Doctor received a full appearance in a Doctor Who anniversary episode.

Matt Smith was at the TARDIS console when Doctor Who’s 50th anniversary rolled around, and played the young, fresh-faced whippersnapper to Ten and the War Doctor in “The Day of the Doctor.” Assuming Smith can find a gap in his movie career, Mr. Raggedy-Man is a shoo-in for our modern Time Lord quintet, and similar to Jon Pertwee’s role in “The Five Doctors” compared to “The Three Doctors,” he’ll be the master (not like that) rather than the student in Doctor Who’s 60th anniversary special. Smith’s dynamic with Capaldi could prove especially compelling, as this “young,” fez-wearing clown would undoubtedly annoy Twelve no end. Despite diversifying into Hollywood, Matt Smith has generally remained open-minded whenever asked about a potential Doctor Who return.

David Tennant already made his Doctor Who comeback for 2013’s special, but even though we’ve seen Ten mix it up with younger Doctors before, the 60th anniversary would lack something without him. Perhaps in greater need of character closure is the Tenth Doctor’s final full-time companion, Donna Noble. There’s plenty of love for Catherine Tate’s Donna among Doctor Who’s audience, and the actress has consistently expressed her willingness to return since departing the TARDIS in 2008. Donna’s story ended tragically when a human/Time Lord meta-crisis meant all memories of travelling with The Doctor were suppressed, lest the mental strain kill her. Eleven and Twelve would know this, of course, and their reactions to seeing Donna (whilst also knowing her sad future) could give Doctor Who’s 60th anniversary its emotional punch. Just as “The Day of the Doctor” averted Gallifrey’s destruction, maybe the combined smarts of five Time Lord minds can conjure up a way to restore Donna’s memory without frying her brain.

With Eccleston and Whittaker highly unlikely to be involved in Doctor Who’s 60th anniversary episode, Capaldi, Smith and Tennant need another two companions foolish enough to join them, and Paul McGann’s Eighth Doctor would certainly prove a popular choice among fans. After debuting in the 1996 Doctor Who movie, McGann’s Time Lord found himself restricted to audio adventures and novels, until the 50th anniversary online short “The Night of the Doctor” gave Eight a sorely-needed live-action comeback. Russell T. Davies can go one step further in 2023, integrating the Eighth Doctor into a proper Doctor Who TV episode. As the only classic Doctor who can still reasonably get away with portraying their particular regeneration, Paul McGann could carry the torch for Doctor Who’s past in the 60th special…

And to represent its future, who better than Jo Martin’s Fugitive Doctor? Though Doctor Who’s 60th birthday comes too soon for Jodie Whittaker to be involved, Martin remains a relative novelty, having only featured in a handful of episodes across the Chris Chibnall era. The Fugitive Doctor’s forthright, no-nonsense attitude would compliment her four successors perfectly (Tennant especially), and her experience in The Division draws a moral divide worthy of further exploration. Then there’s the question of whether Jo Martin’s Doctor should reveal her true nature to the other four, posing a multi-faceted, timey-wimey debate for the 60th anniversary to dig its teeth into. Perhaps the Fugitive Doctor lies by claiming she’s a future regeneration, but one of them (probably Capaldi) eventually figures out she’s pre-Hartnell.

Though The Doctor doesn’t boast a 100% record when it comes to keeping companions from fatal harm, a few TARDIS friends are still loitering on Earth, and many deserve a modern cameo. Near the top of that list is Seventh Doctor companion Ace, played by Sophie Aldred. In promotion of the BBC’s season 26 re-release in 2019, Doctor Who dropped an online short film featuring an older Ace in the present day. She now runs an organization called A Charitable Earth (see what they did there?) in London, England which – as we all know – is The Doctor’s favorite place to be. Whatever trouble The Doctors find themselves in during Doctor Who’s 60th anniversary special, Ace might be around to lend a hand… and some nitro-9.

As Doctor Who’s original companion and The Doctor’s beloved granddaughter, it’s amazing Susan hasn’t already returned in the modern era, her last TV appearance coming in “The Five Doctors.” Susan was left on Earth by the First Doctor after she fell in love with a human resistance fighter. Her adventures have continued in Big Finish’s audio stories, but as The Doctor’s only known family, Susan is one of precious few characters possibly able to shed some light on the Timeless Child mystery, and where her grandparent actually came from. Susan’s original actress, Carole Ann Ford, could reprise her role, but if trouble runs in the family, she might’ve regenerated several times since her last appearance. Doctor Who’s 60th anniversary is a celebration to mark the franchise’s birth in 1963 – it makes sense to include someone who was actually there.

Not least because River’s face upon seeing multiple Doctors in the same room would be a sight to behold. River has forged distinctly unique relationships with the Tenth, Eleventh and Twelfth Doctors since debuting in 2008, so she’s the connective glue (the referee, in other words) between this potential pentagon of Time Lords in the Doctor Who 60th anniversary spectacular. River Song last appeared in 2015’s Christmas special, which falls directly before her death in “Forest of the Dead,” but the chaos of River’s Doctor Who timeline means a return can never be ruled out in any era. If every regeneration brings their own companion, Doctor Who’s 60th special risks becoming cluttered with plus-ones. Inviting back River – as a companion that three Doctors are already familiar with – makes much more sense.

When the Third Doctor found himself exiled on Earth and forced to make friends with UNIT, he fostered a small core of allies consisting of Brigadier Lethbridge-Stewart, Jo Grant, Sergeant Benton and Captain Yates. While the Brigadier is, sadly, no longer with us, UNIT remains active thanks to his onscreen daughter, Kate Stewart. Grant, Benton and Yates would all be long retired by the time Doctor Who’s 60th anniversary takes place, but Kate Stewart might find herself in a situation where UNIT’s current staff are compromised, so she calls upon three of her father’s old friends to help The Doctors save the day. Returns for Katy Manning, John Levene and Richard Franklin would represent Doctor Who’s 1970s era perfectly.

“The Day of the Doctor” introduced a mysterious character by the name of “The Curator,” played by Tom Baker. Though it’s suggested The Curator is some version of The Doctor, their connection is left intentionally vague – a poignant Easter egg, rather than a serious plot point. Having debuted exactly a decade prior, The Curator is a natural addition for Doctor Who’s 60th anniversary – but rather than Tom Baker reprising the role, perhaps Peter Davison plays the enigmatic figure this time around, providing sage advice to his successors, and leaving another tiny breadcrumb as to his true nature.