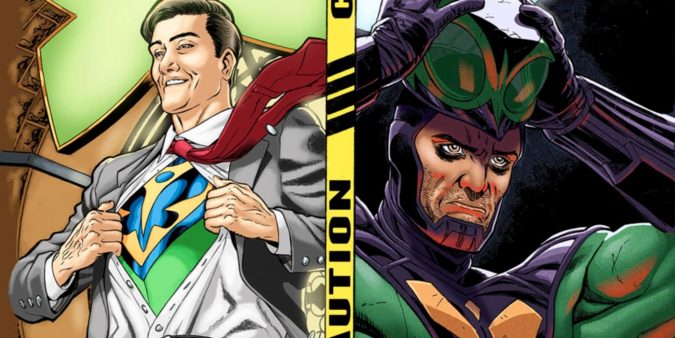 Screen Rant has an exclusive look at Ahoy Comics’ upcoming The Wrong Earth: Fame & Fortune #1, and the next adventure for the publisher’s beloved multiversal duo may give Bruce Wayne a run for his money. The story by Mark Russell and Michael Montenat is the second in a series of one-shots aimed at expanding the world of the fan-favorite comic.

The Wrong Earth came from the creative team of Tom Peyer, Jamal Igle,  Juan Castro, Andy Troy, and Rob Steen and told a dual narrative of superhero Richard Fame: On the colorful Earth-Alpha, he’s the equally colorful and dashing Dragonflyman and on the crime-ridden Earth-Omega, he’s the brooding crusader, Dragonfly. Accidentally transported to one another’s Earth, the doppelgangers must look inwards to become the heroes their new homes truly need.

To build on the novel idea, Ahoy has begun releasing a set of one-shot specials to tell the untold stories of both versions of Richard Fame. The Wrong Earth: Fame & Fortune #1 comes from Mark Russell, Michael Montenat, Andy Troy and Rob Steen. With both the Alpha and Omega Fame desiring to build a football stadium, each approaches the idea in a manner befitting their particular earth. While Earth-Alpha Fame emphasizes the importance of investing in a community, deals on Earth-Omega are done in backrooms with questionable methods. Screen Rant has an exclusive look at the one-shot, including backup material from David Hyde and Marco Finnegan that gives readers cocktail suggestions for a taste of the good life.

Ritzy and intoxicating beverages aside, the brief preview continues the work set up by Peyer and Igle with The Wrong Earth. The two Richard Fames are so vastly different in the ways they fight crime, with Dragonflyman believing in a softer, forgiving approach while Dragonfly is ready to put villains down for good. Of course, Earth-Alpha is an idyllic innocent throwback and Earth-Omega is ludicrously dark, so their methods are bound to be influenced by their surroundings. But unlike the main series, Fame & Fortune opts to highlight another crucial difference between the two.

The Richard Fame of Earth-Omega is incredibly jaded, not only from the rampant corruption in his world but from losing someone he loved dearly. Dragonfly approaches everything with a more cynical, pragmatic approach, no doubt leading to his willingness to engage in such shady business practices. By contrast, Alpha Fame’s optimism is contagious and helps him seal his own deal. The two may have their differences, but both are successful in their own way.

It may not be pulse-pounding action or a thrilling fight with supervillains, but seeing how Dragonfly and Dragonflyman handle backroom dealings and community investment could be entertaining in its own right. Fans of Ahoy Comics will be able to pick up a copy of The Wrong Earth: Fame & Fortune #1 on April 13, 2022.

Next: Ultra-Violent Satire Justice Warriors Is RoboCop for 2022

Justin Epps is either a professional amateur or an amateurish professional depending on who you ask. Wanting to break into entertainment journalism, as well as capitalize on his lifelong hobbies, he’s begun taking up writing jobs starting here at Screen Rant. He’s currently based in South Carolina and wondering if it’s humanly possible to type up 600 articles a month.