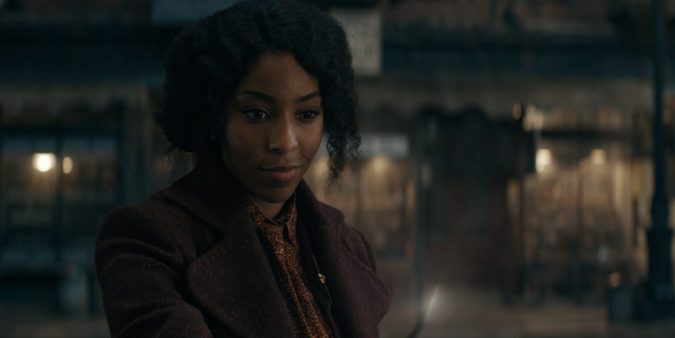 Fantastic Beasts: The Secrets of Dumbledore star Jessica Williams reveals that she based her magic on tennis stars Venus and Serena Williams.

Fantastic Beasts: The Secrets of Dumbledore star Jessica Williams reveals that she based the magic of her character Eulalie “Lally” Hicks on tennis legends Venus and Serena Williams. Best known for her work on Comedy Central’s The Daily Show with Jon Stewart as one of the hilarious correspondents, Williams the actress has gone on to have a career in television and film, appearing in projects like the comedy hit Booksmart and the romance series Love Life. Now with Fantastic Beasts 3, she looks to jump into a major Hollywood franchise.

Williams stars as Lally in this week’s Fantastic Beasts 3, reprising the small role she had in 2018’s The Crimes of Grindelwald, where she was relegated to a photograph in a book. Lally is a Charms professor at the North American wizarding school Ilvermorny. She joins magizoologist Newt Scamander (Eddie Redmayne), No-Maj Jacob Kowalski (Dan Fogler), Newt’s brother Theseus (Callum Turner), and Harry Potter fan favorite Albus Dumbledore (Jude Law) in their quest to stop the dark wizard Gellert Grindelwald (Mads Mikkelsen) from starting a war against Muggles. Fantastic Beasts 3 is the midpoint for the Harry Potter prequel series, with two more movies potentially on tap.

Williams recently sat down for an interview with Collider and revealed that, when filming Fantastic Beasts 3, she based Lally’s magic on Venus and Serena. Williams explained that the tennis icons were excellent models for her magic skills in The Secrets of Dumbledore due to their strength. Read what the comedian had to say below.

“I’m so excited about my character. I think she’s really strong and really capable. She’s really good at defensive magic and she has some really cool, badass sequences in this movie that I’m so excited for everyone to see. I modeled a lot of her wand work after Serena and Venus Williams. I like that she does this really cool, strong magic like she really means it. Eulalie is really heart-driven and I think she’s really good at seeing at the heart of people, and I think Dumbledore recruits her because he knows that about her. And I think she’s somebody you can always depend on to do what’s good and what’s right.”

Venus and Serena are known throughout the world for their domination of the sport of tennis for over two decades. Their power and athleticism coupled with a sense of confidence allowed them to be unmatched in the game. As Williams mentioned, Fantastic Beasts 3’s Lally is a strong character who holds herself with much self-confidence, so it is no surprise she modeled her wand skills after the athletes. Although she had a very brief cameo appearance in The Crimes of Grindelwald, Williams adds that Lally will be a major player in the rest of the Fantastic Beasts series.

Good actors try to understand their characters to their cores, dissecting what makes them tick, and many look to the real world as inspiration. For example, Sylvester Stallone modeled Rocky Balboa’s distinctive fighting technique after the legendary boxer Rocky Marciano. Modeling an athlete after another similar figure seems like an obvious choice, but for Williams, there are no real witches she can use for her Fantastic Beasts performance. Venus and Serena appear to be excellent stand-ins for Lally’s wand movements as the sisters are famous for their forceful tennis strokes that won them more trophies than most athletes will ever see in their lives. This is an interesting instance where real life can connect to the fantasy world of Fantastic Beasts 3, and audiences can see it come to fruition soon.

Next: How Many Fantastic Beasts Movies Are There (& How Many Are Left)

Spotify Now Playing Not Showing? Why Your Controls Disappeared