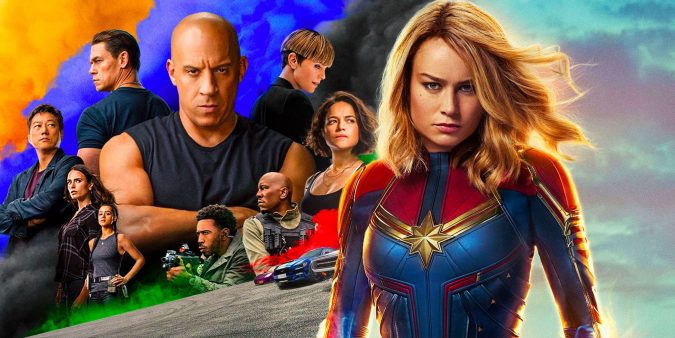 Vin Diesel announces on social media that Brie Larson is joining the Fast family in a mystery role for the upcoming Fast and Furious 10.

Vin Diesel announces that Fast & Furious 10 will include Brie Larson. Over 20 years after the original Fast and Furious hit theaters, the franchise is still going strong, with the tenth film releasing sometime next year. Diesel, Michelle Rodriguez, Tyrese Gibson, Ludacris, Nathalie Emmanuel, Sung Kang and many other franchise veterans are returning for the sequel. However, like each past installment, Fast & Furious 10 is introducing new stars to the franchise.

The biggest casting announcement thus far has been Jason Momoa as the villain. Very little is known about Momoa’s character, but the actor has described his villain as “flamboyant” and “misunderstood.” Additionally, The Suicide Squad’s Daniel Melchior was cast just last month in an undisclosed role. Diesel also attempting to end his years-long feud with Dwayne Johnson to have him return as Luke Hobbs, but the DC star has declined to be involved in the next movie. However, the sequel just added an MCU star.

According to a recent Instagram post by Diesel, Larson has officially joined the cast of Fast & Furious 10. Like previous casting announcements, Diesel didn’t reveal who Larson is playing but teased she will be a “timeless” addition to the Fast and Furious mythology. The actor’s original post can be seen below:

Christopher is a news writer, editor, and senior trainer at Screen Rant. He graduated from Rock Valley College in 2018 with an Associate of Arts degree and a Media Production Specialist certificate.

After running his own movie blog for over five years, Christopher joined the Screen Rant team in 2018 as a list writer. Christopher is a sucker for ‘80s horror and giant monster movies but has covered a wide range of topics during his employment at Screen Rant.