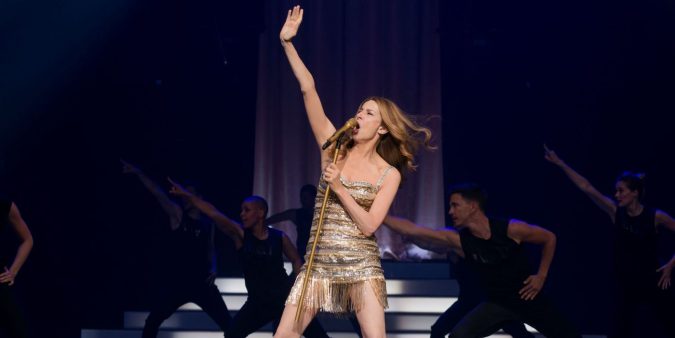 The result is a baffling and confounding mess that is either intended to make audiences laugh or is dead-serious in its pursuit.

Mega-superstars Cher and Madonna are currently overseeing the biopics of their lives, with the latter putting Hollywood’s brightest ingenues through rigorous auditions. The two have lived spectacular lives worthy of not only one biopic, but multiple. Similarly, the Canadian icon, treasure, and unofficial queen Celine Dion also has a life worth documenting on the big screen. Her story was once the subject of a TV biopic that earned some accolades. Of course, like many TV biopics, it was simply not noteworthy to larger audiences. Enter Aline. This unauthorized, fictionalized biopic of Dion’s life presents a compelling case for why stars should have more say when it comes to biopics of their lives. Valérie Lemercier, nicknamed the Kristen Wiig of France, felt compelled by her love for Celine Dion, so she set out to co-write (with Brigitte Buc), direct and star in a biopic about the singer’s life. The result is a baffling and confounding mess that is either intended to make audiences laugh or is dead-serious in its pursuit. Whatever the intention, it is up to viewers to decipher what is most true to them.

Loosely based on Dion’s life, Aline follows Aline Dieu, the youngest of a large Québécois family. Aline shines bright with a dazzling voice at a very young age. After getting the attention of music manager Guy-Claude Kamar (played by Sylvain Marcel and loosely based on Dion’s late husband René Angélil), becomes an international star. The film provides a disclaimer at the beginning to indicate that names and certain events have been changed. But for the most part, the film is a fairly accurate depiction of Dion’s life, including her romance with her much older manager who began working with her when she was 12 years old.

Related: Why James Cameron Originally Hated Titanic’s Song “My Heart Will Go On”

Lemercier plays Aline/Celine at every stage of her life, from her childhood onwards. It is a very strange choice, one that will either have one howling with laughter as the very much grown Lemercier unconvincingly plays pre-teen Aline. As Aline moves forward, it attempts to have viewers just accept Lemercier’s shrunken frame and obviously de-aged CGI face (that fails to do any actual de-aging). Audiences are confronted with the reality that this is a blandly pieced together picture. No biopic has ever managed to overcome the scathing smackdown that is Walk Hard: The Dewey Cox Story, and biopics have since managed to entertain as best they can by recreating iconic moments to the best of their abilities to elicit a strong emotional reaction from audiences, like Queen’s Live Aid performance in Bohemian Rhapsody. Aline sticks to the major events of Dion’s life, skipping over any of the significant moments regarding Celine as a singer and focusing on the personal moments regarding her family and romance. Even then, the film lacks a sensitive or nuanced portrayal of the singer herself.

The romance between Aline and Guy-Claude is developed rapidly and in a shockingly comedic manner. There is a scene where 17-year-old Aline gets a makeover, opens the door to Guy-Claude, only to have a gust of wind blow her hair as she does her best “I am sexy now” pose, with a sparkle on her teeth to indicate that years of braces and dental work have succeeded. What the audience sees, however, is a woman in her 50s playing a teenager who develops romantic feelings for her 40-something-year-old manager over the first few years of their partnership. Lemercier does not attempt to suggest anything is wrong with this pairing (regardless of it being based on reality). What is onscreen, however, is two grown people over the age of 40 engaging in a romance. Perhaps the casting choice did not come from taking creative liberties, but rather to trick the audience into accepting the pairing.

Aline flashes through the singer’s life through a series of montages, with the trajectory taking on a very familiar structure. Even with a few entries from Dion’s musical catalogue, the film is barely tolerable. The movie has a very basic visual palette, one that fits in with the music biopics on Lifetime. There are no aesthetic choices or interesting shots to speak of. Nothing about this film feels like it is worthy of the fabulous Celine Dion. Cannes’ audience gave it a standing ovation, and this author has to wonder if it is because they endured the movie or if they actually saw cinematic artistry.

The film ultimately begs the question: Why Celine Dion? Why could this film not take on the task of crafting an entirely independent narrative about a musician’s rise to superstardom à la Vox Lux? The answer is perhaps very simple — no one would pay attention if it wasn’t Celine Dion. The creative freedom seems to only be reserved for Lemercier’s questionable decision to play Aline/Celine at every age. However, when one casts aside that choice and the severe lack of Dion’s biggest moments, Aline becomes nothing other than a joke and a waste of time.

There is a clear love and respect for Dion in this film, admiration for her family, her love for René Angélil, and the person Dion is in-between the big star-powered moments. As flattering as this display of affection is, it is a distasteful mockery of the life Dion has lived. Lemercier’s talents, which are evident as she is a competent actor and filmmaker, are wasted in this attempt. Perhaps if she instead wrote, directed and starred in a fictitious film about a fictitious star, Aline would be passable or perhaps free to be more artistically daring.

NEXT: Lucy And Desi Review: Poehler Knocks Her Documentary Debut Out Of The Park

Aline opened in theaters on Friday, April 8. The film is 126 minutes long and is rated PG-13 for some suggestive material and brief language.

Ferdosa (she/her) is a lifelong student of cinema. She dreams of being a film festival programmer and is working her way towards that goal by consuming a concerning number of films every week.