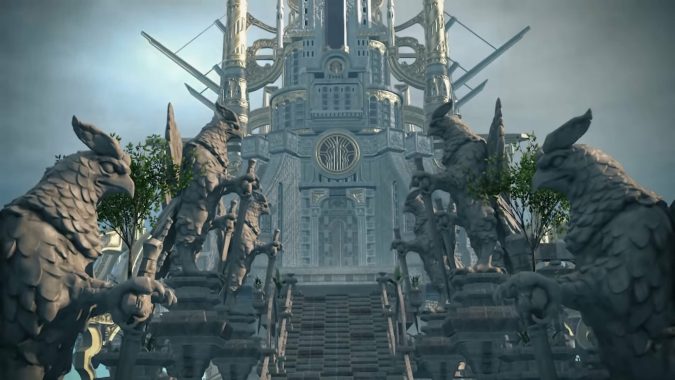 During the latest Live Letter From the Producer, Final Fantasy XIV creative director and lead producer Naoki Yoshida gave us a tiny look at the first leg of the Alliance Raid for Endwalker in Patch 6.1. As previously announced, the name of the raid series is Myths of the Realm. It shall cover the mysteries of the Twelve, the gods that ruled the world before the rise of the tribes. This first wing now has a name: Aglaia.

The new section looks pastoral, almost the complete opposite of the current Pandaemonium raid. The entire region was cast in white marble with purple runes and crystals providing some contrast — a sort of mix between Final Fantasy and ancient Greek architecture. In the background of one section, a large palace or temple could be seen, as well as a giant statue of Rhalgr (one of the Twelve). Both are also featured in the FFXIV Patch 6.1 trailer.

The brief snippet of music was light and whimsical. That’ll likely change once we get into it with the bosses of the raid, but the small bit we heard recalled the Elpis vibes. There were some small looks during the Patch 6.1 trailer of what looked to be bosses from the raid, and they don’t look like folks we want to mess with.

The Twelve seem to somewhat be inspired by the Greek and Roman pantheon, albeit with an FFXIV spin. Hercules, Zeus, and Athena, or at least characters like them, were featured in the trailer. What looks to be the potential last encounter of this first wing is against twin bosses. What secrets will we prise from their dead corpses week-after-week? Yoshida said that similar to the NieR: Automata raid’s 2B, there will be characters journeying alongside you through Myths of the Realm, characters they wanted to keep hidden in this preview.

Alongside a look at the raid itself, Yoshida gave us a sneak peak at the gear that will be coming out of it. The entire ensemble is flowing robes and golden highlights. Yoshida said the art team worked very hard on the golden parts of the armor, which will reflect the lighting of the environment. There were also other intriguing bits like the tank armor having a see-through cape.

In an interview with Game Watch (translated via Audrey “Aitaikomochi” Lamsam), Yoshida explained that players shouldn’t expect the raid to be tied to the main story down the line. Instead, it’ll be somewhat like Return to Ivalice raid from Stormblood, having its own contained storyline. Yoshida also admitted that the raid will be somewhat like an epilogue to the Hydaelyn-Zodiark saga that ended in Endwalker.

Additional details from this latest Live Letter are available right here on The Linkshell, including a closer look at some sweet new Hrothgar haircuts. You can find guides on the current Moogle Treasure Trove or FFXIV endgame gear. Once the patch hits though, we’ll also have a brand-new, currently-secret dungeon to add to our very serious dungeon tier list