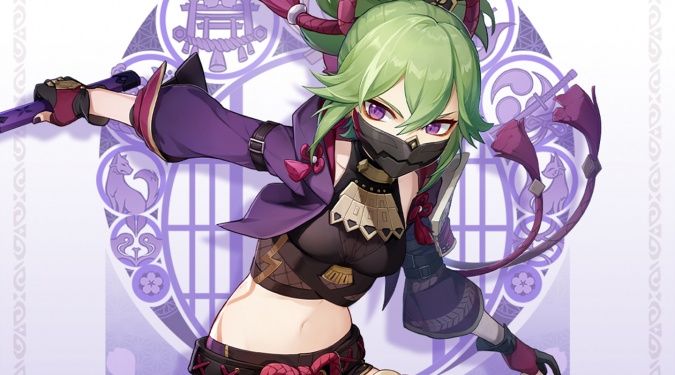 Kuki Shinobu, Deputy Arataki Gang Leader and the DPS/Support hybrid of your dreams, is said to arrive in Genshin Impact Version 2.7. This 4-Star Electro character from Inazuma heals the team, electrocutes every enemy in sight, and does it all on low health. Spoiler: her kit is kind of weird. With a big thank you to Honey Hunter for providing all the necessary intel, here’s our Kuki Shinobu build guide.

If miHoYo follows the usual update schedule and Kuki is indeed released at the start of Version 2.7, you should expect to see her released around May 11, 2022.

Kuki Shinobu is a 4-Star Sword user with Electro Vision. She’s a passive Elemental DPS and Support hybrid. Luckily, both her Elemental Burst damage and health restoration scale with her max HP, making it easier to get a proper build.

A few things stand out about Kuki’s kit: her Elemental Skill costs 30% of her HP, and her Burst damage and restoration ability become stronger when she’s at 50% health or below. In other words, you actually want her to lose that 30%, and preferably more.

With that in mind, try to use the abilities as follows: activate the Elemental Burst AoE as often as possible, and trigger the Elemental Skill whenever an ally needs healing. Be sure to change characters immediately after using it, or Shinobu herself will be the one gaining health.

Summons a Grass Ring of Gratification at the cost of 30% HP. Deals Electro damage to nearby opponents.

The Grass Ring keeps circling around the active character, dealing Electro damage once per 1.5 seconds and restoring health based on Kuki’s max HP.
The HP cost of this Skill can’t bring Kuki below 20% HP.

Stabs a blade into the ground that deals continuous Electro damage to all enemies within its AoE. Damage scales with Kuki Shinobu’s max HP. If her HP is 50% or less, the AoE will last longer.

Gain 25% more rewards when dispatched on an Expedition in Inazuma for 20 hours.

Going for a completely overpowered Kuki Shinobu? Then look no further than the Jade Cutter. It offers a massive HP and Attack bonus based on the wearer’s HP. The Mistsplitter Reforged is also a great option, but it’s hard to gain the full buff due to the need of Elemental damage using a Normal Attack.

The ideal free-to-play weapon is the 3-Star Iron Sting, which boosts damage as well as healing (through Elemental Mastery scaling). This weapon can be crafted at a Blacksmith’s station. If you’d rather focus your Kuki Shinobu build on her Elemental Burst, go for the Favonius Sword instead.

Remember, as Kuki is most powerful at low health, using an HP-restoring weapon like the Black Sword is not a great idea.

You’re probably not surprised to see Tenacity of the Millelith at the top of Kuki’s Artifact list. Thanks to her continuous Elemental Skill damage, she can easily trigger the buffs for her teammates. However, if you’d rather focus your Kuki Shinobu build on either healing or Burst damage, there are some alternatives.

For a Burst DPS build, combine a 2-piece Tenacity set with a 2-piece Emblem or 2-piece Noblesse Oblige set. Alternatively, if you wish to focus on the healing ability (Elemental Skill), you can choose a combination of Tenacity and Wanderer’s Troupe, or the Maiden’s Beloved set.

As for individual Artifact stats, HP is the most important one. Although the Heart’s Repose passive increases Elemental Skill damage and healing based on Elemental Mastery, remember that both the Skill and Burst scale with HP. Try to get Elemental Mastery (especially healer builds) and Energy Recharge (especially Burst DPS builds) on sub-stats. You might want to reserve your Circlet of Logos for Critical Rate (DPS/hybrid Kuki) or a healing bonus (healer Kuki).

Tenacity of the Millelith – (2) +20% HP. (4) When an Elemental Skill hits an opponent, all nearby party members’ Attack is increased by 20% and their shield strength is increased by 30% for three seconds. This effect can be triggered once every 0.5 seconds. The character using this artifact set doesn’t need to be on the field.
Maiden Beloved – (2) +15% Healing effectiveness. (4) If you use an Elemental Skill or Elemental Burst, all teammates receive +20% healing for 10 seconds.
Wanderer’s Troupe – (2) Gain +80 Elemental Mastery.
Noblesse Oblige – (2) +20% Elemental Burst damage.
Emblem of Severed Fate – (2) +20% Energy Recharge.

We’re facing a bit of a weird situation here: Shinobu is the team’s healer, but it leaves her very vulnerable. If you want to give her some extra protection while keeping her at low health, consider teaming her up with a shield provider like Zhongli. Alternatively, since her hybrid combat role might not give the team enough HP recovery, you can add another Support/DPS hybrid like Jean.

As for the Main DPS or additional Sub DPS, go for characters who may benefit from Shinobu’s Electro damage. Someone like Ayaka is great for Superconduct Reactions, while Ayato is perfect for Electro-Charged.

As it’s far easier to gain Constellations for 4-Star characters, it’s recommended to try for at least Constellation Level 2. This will enable you to always deal passive Electro damage with the Skill and hit more enemies with the Burst. Although higher is always better, reaching Constellation Level 6 isn’t that important if you have a strong shield provider and (in case it does go wrong), a recovery dish.

Level 1 – To Cloister Compassion: The Elemental Burst’s AoE is increased by 50%.
Level 2 – To Forsake Fortune: The Grass Ring of Sanctification’s duration (Elemental Skill) is increased by three seconds.
Level 3 – To Sequester Sorrow: Increases the Elemental Skill level by three. Maximum upgrade level is 15.
Level 4 – To Sever Sealing: When the Normal, Charged, or Plunging Attacks of characters affected by the Grass Ring hit opponents, a lightning attack will land on the opponent’s position and deal 9.7% of Shinobu’s max HP as additional Electro AoE damage. This can occur once every five seconds.
Level 5 – To Cease Courtesies: Increases Elemental Burst level by three. Maximum upgrade is level 15.
Level 6 – To Ward Weakness: Lethal damage doesn’t kill Shinobu. Furthermore, when her HP drops below 25%, she gains an additional 150 Elemental Mastery for 15 seconds. Both effects can trigger once per minute.

These are all the materials needed to Ascend Kuki Shinobu:

What are your thoughts on the Deputy Leader of the Arataki Gang? Feel free to share it in the comments!