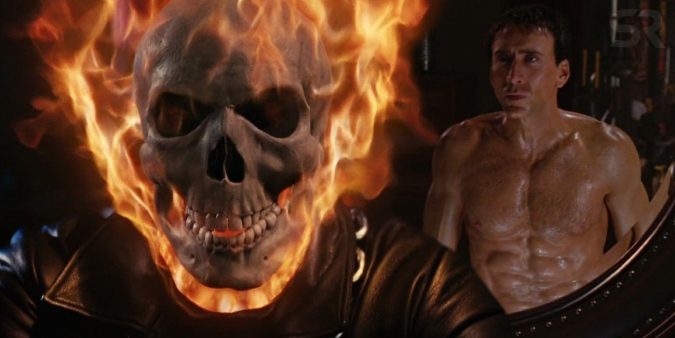 The new Honest Trailer punches back in time for its latest target, the pre-MCU Ghost Rider and its gonzo sequel, Ghost Rider: Spirit of Vengeance.

This week’s entry into Screen Junkies’ Honest Trailers series looks back to take aim at its latest target, 2007’s Ghost Rider and 2012’s Ghost Rider: Spirit of Vengeance. These two Nicolas Cages vehicles might seem like odd choices to mock this long past their releases, but they were critical flops that have earned some cult reputation. While the first film was a pre-MCU release directed by Mark Steven Johnson (director of the much-maligned Daredevil movie), Vengeance was released hot on the heels of the first Captain America and Thor films, which perhaps put its faults in sharper relief to audiences.

Now, Screen Junkies has released the latest Honest Trailer, which tackles both Ghost Rider movies. The trailer avoids any talk of Cage’s uncanny, apparently non-CGI abs in the first film, but it does make a meal out of his oeuvre, using the titles of his (mostly straight-to-VOD) filmography to summarize the plots of the two less-than-super hero films. It also has fun with the questionable choices of the directors, the revolving cast of overqualified actors, and reliably nutty turns from Cage as Johnny Blaze. The hilarious video is below:

Related: Nic Cage Is Right: Ghost Rider Is Amazing (& The MCU Should Realize It)

The Epic Voice Guy does make at least one point in the films’ favor. The fact that they’re “loud, fun, and barely make sense,” actually makes them perfect as comic book adaptations, as most comics are beloved for being exactly those things. However, their chilly reception all but ensured the demon biker would be sidelined in the MCU’s early phase films, but that hasn’t stopped rumors that Cage could appear in Doctor Strange 2 from forming. An alternate version of Ghost Rider has appeared in Agents of S.H.I.E.L.D., so it’s not inconceivable some version of the character could ride again in the MCU’s future.

Next: Theory: SHIELD’s Ghost Rider Is In Phase 4 & Marvel Already Explained How

Kevin Swanstrom is a news writer for Screen Rant based out of Los Angeles. He graduated from Chapman University in 2013 with a degree in Theatre Arts, but might as well have majored in being unemployed. He has a love of fiction writing, horror and cult films, playing trivia, and making music playlists for friends, going so far as to burn them on actual, physical CDs.