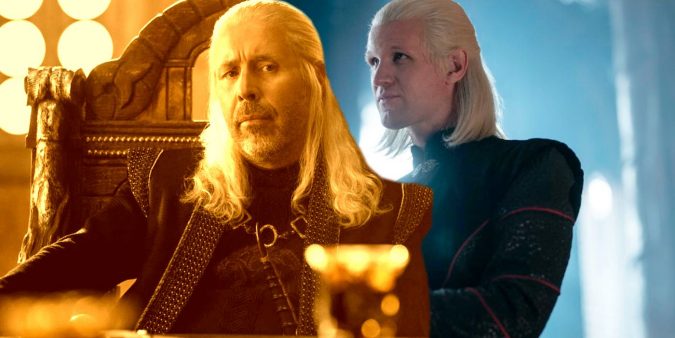 House of the Dragon images reveal better looks at the show’s main characters, and should further ease any concerns over the Game of Thrones spinoff.

Several House of the Dragon images should ease any lingering concerns over the Targaryen-centric Game of Thrones spinoff. One of the biggest shows of all time, Game of Thrones also had its fair share of controversy and proved extremely divisive in parts. That was particularly true of the backlash to Game of Thrones season 8, and while House of the Dragon very much aims to be its own unique show that builds a fresh identity – albeit one built upon the foundations laid by its parent series – it also isn’t without obstacles to overcome.

One of the biggest hurdles for House of the Dragon is the response to Game of Thrones’ ending. Although the show will likely be a big hit regardless because it’s such a recognized and, until season 8, widely acclaimed IP, there’s still a sense of needing to win back those left so disappointing in the conclusion. Given the show is telling a story centered around Targaryens, then it especially means Daenerys’ fate, the most divisive of all the finale’s aspects, could hang over proceedings. More specific to House of the Dragon still, Matt Smith’s casting as Daemon Targaryen proved controversial with complaints that he wasn’t a good fit for the role.

Related: House Of The Dragon’s Release Date Already Breaks A GOT Tradition

Much like the teaser released in 2021, the House of the Dragon images released by HBO in March 2022 should go some way to easing concerns over the Game of Thrones spinoff. The images, which focus on all of House of the Dragon’s main characters in turn – Paddy Considine as King Viserys Targaryen, Matt Smith as Daemon, Emma D’Arcy as Princess Rhaenyra Targaryen, and more – give a good look at what to expect in terms of how these characters are brought to life, and thankfully it looks pretty great. There’s a real sense of forging its own identity while being respectful and fitting with what Game of Thrones did, and it should be clear that any doubts over Smith or anyone else – even Considine, given he doesn’t naturally suggest Targaryen casting – are well-suited to their parts.

Considine, who was somewhat hidden from House of the Dragon’s teaser trailer, looks superb as King Viserys, and even more so Smith looks every-inch the rogue prince he’s supposed to be as Daemon Targaryen, even in a still image believe as someone who could charm one moment and kill in the next. A great amount of care and detail has gone into getting House of the Dragon’s Targaryen aesthetics right; the costuming, always a strength of Game of Thrones too, gives the house a more fully-formed identity that show’s story never completely allowed for, with the clear red and black detailing on Daemon and Rhaenyra in particular nicely setting up the show’s Targaryen Civil War, the Dance of the Dragons, in which their side is labelled “the blacks” based on gowns worn by Rhaenyra and Olivia Cooke’s Allicent (who leads “the greens,” a color she’s shown wearing here).

Details like the seven-pointed star on Allicent’s necklace point to her close ties to the Faith of the Seven, considered by Viserys’ advisors to be an advantage of their marriage, and Viserys himself appears to wield the catspaw dagger, a neat Game of Thrones connection that shows a relatively subtle approach to Easter eggs that fits cleanly within the story. Corlys Velaryon and Rhaenys Targaryen stand together – the only pair in this batch of images who, again, look fantastic – which nicely highlights the show getting their strong relationship and unity right. The images feel like something Game of Thrones could’ve done, but its intricacies and ornate detailing also helps it stand apart as a whole other era of Westeros. Ultimately, House of the Dragon’s images suggest a show operating at a high level of craft and showcase just how great the casting options are for these characters; it’s not a confirmed sign that it will be good, of course, but it definitely points things further in the right direction.

Next: Game Of Thrones vs. Lord Of The Rings Is Now 2022’s Biggest TV Battle

James is Screen Rant’s Movies Lead Editor, having started out as a writer for the site back in 2019. A Sports Journalism graduate, James quickly realized that supporting Sunderland AFC was painful enough without writing about it, and so decided to talk a load of rubbish about movies and TV instead. Formerly the TV editor at WhatCulture, he has a particular love of Star Wars (The Last Jedi was great), Game of Thrones (season 8 was good), and Harry Potter (J.K. Rowling…never mind) – y’know, all that really niche, nerdy stuff. Spending most of his days editing articles about or writing on movies and shows, James likes to really get away from work and unwind by, er, watching movies and shows. He’s fuelled by pint-sized cups of tea, peanut butter, more tea, and a quiet, constant anger (like the Hulk, only not green, or strong, or big).