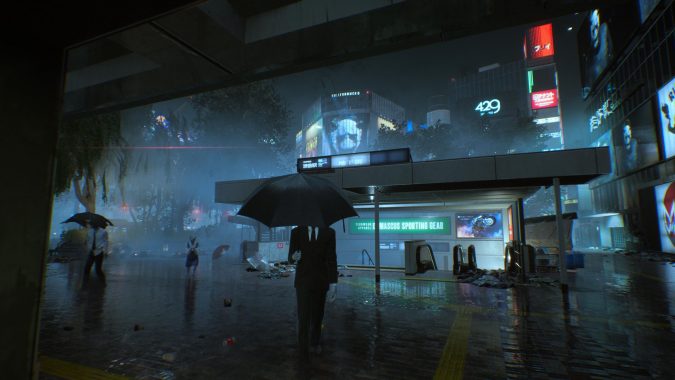 When asking Ghostwire: Tokyo’s lead development team about whether they believe in ghosts, I received mixed responses. While none of the group members have experienced any supernatural interactions of their own, they smiled at the possibility. Game designer Suguru Marakoshi and producer Masato Kimura hope they do one day. Game director Kenji Kimura believes there are “things that we cannot see that do exist.” He jokes that on his way home from work, he swears he routinely sees apparitions of his boss⁠ — studio director and executive producer Shinji Mikami⁠ — after “long, heated discussions.”

Whether the team actually believes in spirits, though, is beside the point: the developers at the Tokyo-based studio Tango Gameworks nonetheless grew up surrounded by ghosts. The yokai, as they are known in Japan, appeared on their television sets through morning cartoons, in their favorite manga, and through spooky tales passed down across generations. In Japan, you can’t escape the yokai, so it makes sense that these ghost stories would fuel the studio’s eerie open-world video game as much as they did.

Ghostwire tells the story of Akito, a young man who survives a paranormal event that leaves much of Tokyo devoid of human life. During this traumatic event, he mysteriously fuses with a spirit named KK who grants him supernatural powers and guides him through a terrifying journey to save the city. Along the way, the duo meet a range of malevolent and benevolent spirits with stories of their own to share. Many of these tales are adapted from actual Japanese folklore that Tango Gameworks’ developers grew up with, learned in school, or researched themselves, bringing an air of cultural authenticity to the game’s many ghosts lurking in the chilling streets.

“We were basically showered with this kind of stuff while we were growing up,” Kenji Kimura tells Fanbyte. “It was everywhere.”

This sentiment is felt across Ghostwire’s digital Tokyo: You meet yokai in every corner, hearing their tales primarily through side missions as you stroll past residential homes, parks, or commercial buildings. Some, like the yokai that appears as a hopping umbrella with a large tongue (known as Kasa-obake in Japanese folklore), are lighthearted; others, like the whispers of a deadly ritual occurring within a deep forest (ushi no toki mairi), are much darker. The yokai are meant to be a natural part of the world, whereas Visitors — hostile specters which are the game’s most common enemy types — take a more human form, as they manifest from humanity’s strong negative emotions during pivotal stages of life.

“In Japanese urban legends, when you really dig into the research, it’s not really about these strange paranormal beings jumping out of the streets to come out and kill you,” Kenji Kimura says. “The stories are more like, ‘there’s a dark shadow between these two buildings over there. I think I see something moving, let me go take a look.’ Then when you get closer, there’s actually somebody standing there, and then as you get even closer, you find out that it’s a person that doesn’t have a face.”

This thinking fueled how the team crafted enemy interactions: From a distance, Visitors can seem ordinary, such as school children or businessmen. But upon a closer look, that child may be headless or missing other limbs.

“It was kind of difficult,” Kenji Kimura says. “There were a lot of challenges in creating those because we wanted them to still be enemies, and so they needed to look a little vicious too.”

Early in development, the team scoured Tokyo’s underground shopping centers, subway stations, arcades, and landmarks to help conceptualize the game. It was important that their version of Tokyo would be neutral ground for yokai to exist in a multitude of ways.

“The yokai stories that we hear from our grandparents — the ones that are passed down through verbal communication — are normally just ways for older people to communicate to younger children to explain natural phenomena, or try to explain certain things that they want the children to think or believe,” Masato says.

The lead team asked the studio to jot down their favorite yokai, which were then gathered and tallied, with the most popular choices being considered for the game. The Kappa, a reptilian creature that lurks in bodies of water and has a strange fondness for cucumbers (Kapp’n from Animal Crossing is the same species), was listed the most frequently. But adding the Kappa (and other yokai) introduced some challenges. Many, many different versions of Kappa exist, ranging from lighthearted to downright barbaric, and the concept art team would routinely whip up several versions of one yokai. For the Kappa, the team made around ten versions.

“Depending on the age and the timing of when [the folklore story] was written, and maybe even perhaps the region of Japan it [derives from], there’s going to be a lot of different versions of the yokai, especially in the stories,” Masato says.

The Kappa, for example, are often depicted as a cautionary tale to keep children away from rivers and seas, whereas in other scenarios they are friendly beasts. Even the Oni, who are often considered demonic, are sometimes described as humanity’s protectors instead. In Ghostwire, most yokai are presented as friendly — a deliberate choice from the development team.

“The thinking for our game was that the yokai would be helpers,” Masato says. “If you take on some of these side missions, they offer you an item that helps you power up those natural abilities that power your attacks. That’s one of the reasons why they are depicted as more lighthearted or friendly.”

But not all of them are amicable. The Kuchisake, a female ghost who wields a long pair of scissors and wears a surgical mask to conceal grisly scars around her mouth, is among one of the scariest enemies in Ghostwire. In Japanese folklore, she appears to her victims with a question: “Am I beautiful?” How she deals with her victims depends on their response. In Ghostwire, however, she is immediately hostile no matter what. Murakoshi explains that enemies were created first with no dialogue options present, which is different from the more communicative, non-hostile yokai within the game.

“The Kuchisake was created before we even started thinking about creating yokai, but if things were of a different order, or if the development took a different path, and the timing of considering the Kuchisake was different, then we would have definitely considered situations where talking to her would be something of interest,” Murakoshi says. “But we already had created her as an enemy, and so that topic just never came up.”

“It’s something that we didn’t really think about, just because of the order of things that we created,” Kenji Kimura says. “But that’s something that we probably should think about, too, because a big part of Ghostwire is about communicating with entities that you can’t normally see, and removing those things that prevent us from being able to communicate with those entities. That’s why there’s shrine gates and portals in the game that can take you to another world.”

Breaking down communication barriers between human and spirit feels more focused when it’s solely the experience of Akito and KK. But at one point, Tango Gameworks toyed with the idea of a world filled with life rather than just the dead. The team considered creating a Tokyo that wasn’t fully abandoned, meaning humans would coexist alongside ghosts rather than just a select few. It’s an approach that could’ve changed the game drastically, especially since Ghostwire is not always scary enough to be as barren as it is.

“In one of the iterations of the storylines we created, yes, there were still people that were alive in the city,” Kenji Kimura says. “But it made things a little bit more difficult with some of the side missions and the gameplay to have humans still existing there. And so to make the game easier to understand, and to make it more enjoyable, we removed all those humans that were still alive.”

The biggest hurdle would have come from a storytelling perspective: Protagonists Akito and KK have a chance meeting during the beginning of the game, and their fusion allows for them to survive together. How would the team make it plausible for others to survive, too, if those chances were already so slim?

“If there were other people that still survived this supernatural vanishing event, then the question arose of, how did the other people survive? And what do those other people know about this big vanishing event?” Kenji Kimura says. “We started going down the path of, ‘Okay, do we want to start depicting how these other people also survived? And what exactly are they going to be doing in parallel to what KK and Akito are doing?’ And then we decided we wanted this story just to be focused on Akito and KK to better communicate the storyline and the gameplay that we wanted to put into the game.”

With only the dead roaming the streets alongside Akito, little is normal within Ghostwire — even the unremarkable is never safe. Just as the supernatural was ever present within the lives of the developers as they grew up with ghostly books, television shows, and childrens’ stories, the yokai of Ghostwire also lurk within the most ordinary of places. This dichotomy, Kenji Kimura explains, is what the team sought to capture.