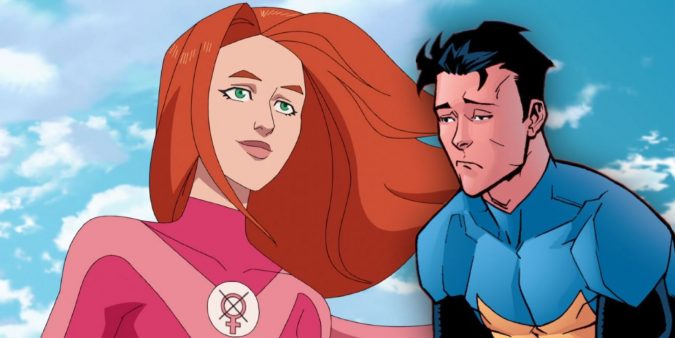 Warning! Major Spoilers for Invincible ahead!

Mark Grayson, Atom Eve, and Omni-Man, from Robert Kirman, Cory Walker, and Ryan Ottley’s Invincible, are now some of the most popular comic book characters today, especially since the debut of Amazon Prime’s original series. The first season reintroduced Mark, (AKA Invincible) as the narrative’s protagonist. Throughout the first few adventures in his superhero career, he learns what it means to be a superhero. However, the complete story evidently displays Atom Eve as an even greater hero than Mark.

Atom Eve’s popularity comes from her molecular alteration abilities. When under considerable stress, Eve can unleash a power that rivals Watchmen’s Doctor Manhattan. However, even in relaxed circumstances, Eve is capable of turning a stone into a cheeseburger. The limits of her powers progressively shrink as the comic book series goes on. Nonetheless, her actual character, personality, and moral stance better define who she is than her atomic alteration powers.

She Helps Those Who REALLY Need It

Atom Eve’s humble beginnings among the Teen Team put her in a solid position to use her powers for good, which actually helps Invincible kick off his superhero career. Mark joins the Teen Team soon after getting his powers, and because Eve goes to the same high school as Mark, she is able to help him with the initial speedbumps of being a superhero and balance his social life. The two suppress feelings for each other, but Mark quickly discovers Eve is dating the Teen Team’s most temperamental member, Rexplode, so he chooses to see her as a friend. However, Eve’s relationship quickly erupts into drama after Rex cheats on her with a fellow Teen Team member, Dupli-Kate. Although she slowly opens up to Mark, the unrequited situation flips as Eve discovers Mark started a relationship with a high school peer, Amber Bennett. After all the relationship drama, Eve goes through some deep introspection and figures out a better way to use her powers.

Because she can turn non-living objects into renewable or non-renewable resources, Eve decides to use her powers to help poor African villages with dry land. Even though Superman once did this in Paul Dini and Alex Ross’ iconic DC Christmas comic, Superman: Peace on Earth, using superpowers for completely selfless and humanitarian reasons is rare among superheroes. Eve chooses to be as selfless as possible, prioritizing feeding the hungry, offering shelter to nomads, and ensuring the environment is sustainable. She also inspires Invincible’s readers without the powers to give back to the less fortunate. But, of course, in the pages of a Robert Kirkman story, catastrophic events often break characters out of a routine, even a noble one. Eve ultimately returns to team up with familiar heroes, including Mark. Still, Eve’s early moments as an independent humanitarian marked one of her best moments in the series.

Even Alternate Versions Are NEVER Evil

In Invincible #34, when Mark ventures 15 years into an alternate reality where he disappeared with his second major villain, Angstrom Levy, he finds a future version of Atom Eve. This version of Eve is not only still a great superhero, but she also changes Mark’s life forever. This dystopian version of Eve reveals that she always loved Mark, which causes the young hero to realize he also loves her. Upon Mark’s return, he and Atom Eve continue to team up and remain allies. However, things are different between them. While he didn’t know it, this future version of Eve was the direct cause for Mark’s most important realization in the series: his most loyal ally is Atom Eve.

Mark eventually breaks up with Amber during college. Amber’s feelings for another boy, Gary, grow. Meanwhile, Mark realizes that Atom Eve is a better partner for him in every way. While a part of Mark will always love Amber, Atom Eve can support and understand Mark in ways his high school sweetheart never could. Eve is also a superpowered character, so they’re not only able to fly together, they relate to one another in the purest sense. Eve and Mark deal with all of their supernatural struggles together, both physical and emotional, and it only brings them closer and closer as the series goes on. None of this would have ever happened if it weren’t for the future version of Atom Eve.

In Invincible #90, Zandale Randolph (AKA Bulletproof) takes over as Invincible for a brief period when Mark Grayson loses his powers. Mark feels very helpless throughout this entire period. Nonetheless, Eve sticks by him and makes sure he’s alright. The new Invincible confides in Atom Eve, just as Mark confided in her when he was Invincible. However, Zandale confuses Eve’s loyalty for infatuation. While consoling her as she feels down, Zandale hints that he wants to get physical with her, but Eve doesn’t hesitate to reject him. The encounter, albeit awkward, between Zandale and Eve proves that she would never betray the trust Mark has in her. Of course, Mark eventually regains his powers and becomes Invincible again.

Related: Invincible Once Got Trapped in the Marvel Universe

Much later, in Invincible #102, Eve and Mark decide to get married. Eve says yes before Mark even asks, and it eventually leads to their family. Once again, this is due to the future version of Eve all the way back from issue #34. Because Invincible and Atom Eve work so well as a couple, they make great parents and bring up their daughter, Terra. They don’t know it until the final moments of the entire comic book run, but their family becomes the framework for a new Viltrum Empire. Through Omni-Man’s eventual redemption, the Viltrumites find a new purpose after understanding why humanity is worth preserving. Once Mark takes his father’s place, with Eve by his side them, they promote peace and justice throughout the galaxy.

She is ALWAYS There for Mark

Eve ultimately helps Mark lead the Viltrum Empire, reminds him of his humanity, and helps him understand the best way to use his powers. When Mark takes over the Viltrum Empire, he unites a force to spread peace throughout the galaxy. The series ends with Mark and Eve in a home with their daughter, and all the suffering in their journeys pays off with the happiest the two have been since they first started dating. Even though Mark’s Viltrumite blood extends his life, he believes Eve’s humanity won’t allow her to be by his side forever.

When Eve is about to die of old age, her powers kick in and revert her to a younger self again. With Eve’s powers essentially making her immortal, the two live out the rest of their days as protectors of the galaxy, leaders of the Viltrum Empire, and humanitarian heroes, inspired by Eve’s first time helping the struggling villages in Africa. Eve proves she’s physically, emotionally, and morally capable of sticking with Mark even beyond Invincible’s ending.

When someone analyzes the story of Atom Eve and Invincible, it basically boils down to a crazy rollercoaster of emotions and experiences as a superhero, but also as a person coming of age. Both Mark and Eve did what they could throughout their character histories to focus on what is right. Nevertheless, even though Atom Eve isn’t the title character of Invincible, she proves, from the very beginning, that her pure heart was ready to help others long before Mark Grayson.

Next: Invincible: A Key Comic Book Element Missing From the Show

Dylan Moure is a writer for Screen Rant, covering the comic book industry, focusing on Marvel Entertainment, DC Comics, and Star Wars. He is currently a graduate student at New York University, where he pursues a Master of Arts in Multimedia Storytelling. Dylan earned a bachelor’s degree at Florida State University, where he double-majored in Creative Writing and Studio Art. He was born in Miami, Florida, to Puerto Rican and Cuban-American parents. His passion for writing and entertainment began in high school, where he joined the newspaper as an entertainment writer/editor. He also founded and led comic book clubs in high school and college. His main interests include DC Comics, Star Wars, Marvel Entertainment, Peanuts, Image Comics, Mass Effect, The Elder Scrolls, and other fantasy/fiction franchises.