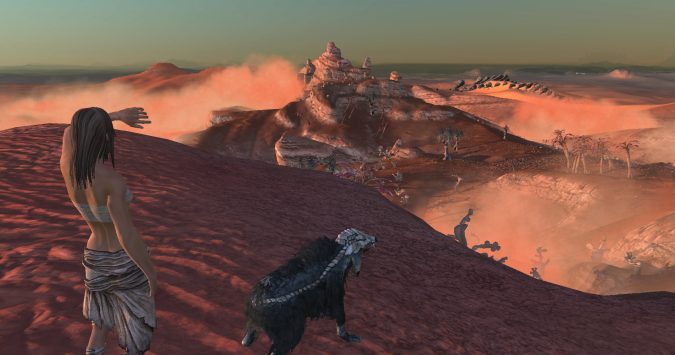 It’s tempting to say Kenshi hates me. I’ve been conquered, kidnapped, robbed, brutalized, had my lands despoiled and my communities scattered. With every new save, I know on some fundamental level that it is only a matter of time before I am subject to some innovative indignity. I might be caged and paraded as a skinny trophy of the local area’s most laughable raiders. My (foolproof) scheme to grow fat and wealthy off the cactus rum trade might end up bankrupting me. I might just starve to death in a lagoon, which at least doesn’t require much exertion on my part.

But Kenshi doesn’t hate me. It just doesn’t care. That apathy is baked into its bones: it’s a stated goal of the game’s creators. Once you finish fashioning your character — who will invariably end up resembling a sun-dried Mudokon — this open-world sandbox sets you down in a Podunk backwater and lets you make your own way from there. The game’s scope for player self-definition is matched only by its scope for failure. Kenshi’s systems are varied enough that you can plausibly pursue almost any career that crosses your mind: trader, artisan, rural guerrilla, local weirdo. Much like life, the choices before you are vast and paralyzing. Much like life, mostly what you accomplish is finding exciting new ways to hurt yourself.

The horrible truth is that Kenshi would be just as content to let me be a person of importance and esteem. There are no insurmountable obstacles to building a flourishing, peaceful community, or becoming the most feared warrior in the land. I just suck at it. It’s humbling: Kenshi is one of a rare breed of games that presents you with a living world and invites you to make what you will of it, and usually what I make of it is an early grave.

But that living world is why I keep coming back. I am not so enthralled by the experience of brutal death  that I feel compelled to return to it again and again. Instead, what continues to draw me into Kenshi is the simple thrill of my complete irrelevance. Kenshi generates stories where other games just tell them to you, and the freedom you have to make every playthrough genuinely unique is derived from, rather than in spite of, the game’s complete disregard for you.

That’s the best part. It doesn’t care about you in exactly the same way the actual, real world doesn’t care about you. While that might be a source of mortal existential dread in reality, in a video game it just creates room for the emergence of the wildest stories imaginable. Every single one of my playthroughs might have ended with me facedown in the dirt, but the path that led me there was always singular. There’s a reason, after all, that the devs themselves draw attention to the many tales of anguish and heartbreak their game has generated.

That makes Kenshi a part of a pretty weird lineage, as games go. You can draw parallels between it and Dwarf Fortress, Mount & Blade, even Introversion’s Uplink or Crusader Kings 3 — none of which think the player is anything special. These are all games where you’re just one more participant in the sandbox, another system among systems. These games are marked by two key features. The first is that the player isn’t notably empowered when compared to the NPCs: a Crusader Kings 3 player doesn’t have access to special tools and mechanics that the AI rulers don’t. The second is that the AI — to a greater or lesser extent — has some power of authorship over the narrative of the game: whatever carefully laid plans I have for my Dwarf Fortress mine, it will all turn to ashes when my foreman catches the Holy Ghost and decides to detonate every level of the fortress below the ground floor.

This approach to game design is a recipe for chaos and death. It owns. We need more of it. As players, we’re all a bit too used to being the beating heart of the universe. The worlds we inhabit are static except for the bits we choose to poke at. That’s fine, but at the end of the day, I and anyone else who played The Last Of Us 2 came away with basically the same experience and stories to tell. Even games that make a hullabaloo about player agency fall short of authorial possibilities: Mass Effect’s Commander Shepard can stand and watch the ships drift into the Presidium docks for as long as they like. The galaxy will wait patiently for them to return to it. Were this Crusader Kings, at some point the nearby Hanar shopkeeper would elect to abduct the Pope out of sheer ennui.

For lots of people, though, games as brilliant as Kenshi have all the appeal of a shark tank. The choice paralysis is overwhelming, the UI is impenetrable, and the possibility of having all your hard work erased because the AI ricocheted off itself at an unfortunate angle sounds more exhausting than exciting. The likes of Kenshi end up left to the purview of the small teams of dedicated maniacs that develop them (sometimes over the course of decades), and weird dorks like me who — we can all agree — have far too much time on their hands to pick through the systems and then write hagiographic articles about them. But if you can quiet that part of your mind that can’t stand to see your progress go up in flames, try giving a game like Kenshi a chance to ignore you. Just remember it’s nothing personal.