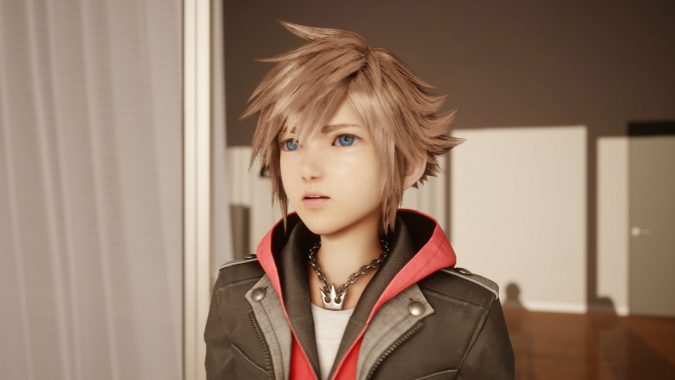 As part of the Kingdom Hearts 20th anniversary, Square Enix revealed multiple new projects in the franchise. Of course, the biggest one is Kingdom Hearts 4. This official announcement came with a fairly lengthy trailer that included gameplay footage, which you can watch below (starting at 4:12 in the video). Kingdom Hearts 4 does not have a release date or even a launch window yet. There were also no platforms confirmed yet for Kingdom Hearts 4.

In the trailer, Sora wakes up in a high-rise apartment in what looks like a modern day Tokyo. He opens his front door for who appears to be Strelitzia, another Keyblade wielder from Kingdom Hearts Union X. She says to Sora, “You’ve been asleep since you arrived in this world seven days ago.” My man has been knocked out good, apparently. They walk out to the balcony overlooking the bustling city with locations straight out of real-world Shibuya. Strelitzia tells him, “This is Quadratum — It’s a world full of life, but you and I, it’s similar to an afterworld, I suppose.” Then a big ass Heartless beast manifests in the middle of the city and all the citizens start running for their lives.

Sora, with a fresh pair of converse on, dashes towards the Heartless beast in the streets and the gameplay sequence begins. It seems he has some wild traversal abilities, jumping and zipping around the city structures. My guy is running up skyscrapers and through flying pieces of buildings. He transforms his Keyblade into a drill for a powerful attack, too. Then two Organization XIII looking asses are shown to be watching from the rooftops. There’s also a post-title card snippet of Donald and Goofy walking through a dark cave together, presumably looking for Sora.

There is a narration peppered through the trailer. At the start, the voice says, “If this isn’t the ending you desired — if it brings you despair — then leave this world for another. Your options are endless.” Then towards the end it picks up again and says, “However, if you do leave this world behind, don’t expect to return to the one from which you came.” The trailer is only available in Japanese at this time, so I couldn’t tell you whose voice it is.