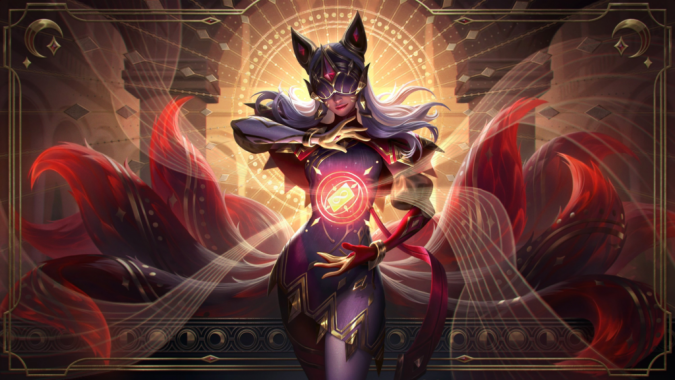 It’s hard to write a definitive guide for League of Legends hextech crafting skin shards. Everyone has their own separate goals after all. Do you only play a few champions and have little use for the vast majority of skins? Or are you an ARAM main who never chooses their champion and wants a wide variety of appearances at your disposal? If you’re in the former camp, disenchant the skins you don’t want to craft the skins you have shards for. If you’re in the latter there are a lot of different routes to take. In this guide, we explain the most efficient way to use those skin shards to maximize your return and finally help you decide whether to reroll or disenchant them.

Before we explain anything, we need to lay out the facts. When you get a new skin shard in League, you can either upgrade it, disenchant it, or use it as one of three skins to reroll into a permanent skin. All of this is using Orange Essence (OE), the game’s currency for all non-Champion related loot like ward skins, Eternals, and emotes.

Before we start, there is one thing to clarify. You can reroll into a skin shard for a champion you do not own. In that case you will be given a permanent unlock shard that you can redeem, for no cost, after you’ve purchased the champion. There is a common misconception that you shouldn’t use the reroll system unless you own every single champion in League, but this has been disproven over the years.

If your goal, like mine, is to get the most value out of your Hextech crafting, the rules are relatively simple. Any skin that costs 520 or 750 RP should be used to reroll. These shards disenchant for only 104 and 150 Orange Essence, respectively, which is next to nothing. Three of these put together, at most, are worth 450 Orange Essence, only enough to craft a single 750 RP skin. As a result, you will almost always either break even or come out ahead.

Keep in mind that there are more than 1,300 champion skins at this point and only 21 percent of them are in these two cheapest buckets. As a result, you should never disenchant these skins. Instead, you should always reroll three of them together. Even though the odds aren’t completely one-to-one when you do so, chances are you’re going to unlock a skin that is worth more than what you put in.

One note here, however. Technically the most efficient thing you can do with 520 shards is to upgrade them and eliminate them from your reroll pool. They only cost 220 Orange Essence to unlock and you’ll save far more Orange Essence in the future when rerolling than what they cost. While this will save you from future pain, it will mean you’re frequently be low on Orange Essence until you’ve collected most of the nearly 300. Unless you actually enjoy these cheap skins, this is one area we’re okay not being 100 percent efficient.

What About 975 Skin Shards?

That’s the easy part out of the way, but what should we do with the more common 975 skins? You can do a few different things. Always feel free to mix one you don’t want with any shards of the lower two values. But the real question is as to whether it’s worth rerolling three 975 shards together for a random permanent. It’s pretty straightforward though, actually. Three 975 shards are worth 585 Orange Essence. That’s 90 fewer than you need to actually craft one of those 975 shards in your inventory, but it is more than the 750 and 520 skins cost.

In the end, we come back to the same odds discussion. If all you care about is unlocking as many skins as possible, you should reroll all 975 skin shards that you do not want to upgrade. As long as the permanent it unlocks is worth 975 RP or more, you’ve come out ahead in Orange Essence. There will undoubtedly be times where you reroll three skins and end up with something like Cottontail Teemo in your lap (the you in this situation is me), but the odds are in your favor to come out ahead. In addition, you can only have so much bad luck. Once you’ve unlocked Cottontail Teemo, it’s not like you can reroll into that skin again. This is an elimination system. Over time you’ll become less and less likely to lose out on Orange Essence in the exchange.

For an example, I recently rerolled a total of four times using 975 skin shards. These were the results:

In total, I saved about 280 Orange Essence using this method. It’s not much, but over your account’s lifetime you can save a ton of time. You’ll never get to the point where you’re unlocking limited skins because you own everything else this way, at least without spending real money, as Riot releases new skins too quickly for that. But it’s not unfeasible to eventually reach the point where you can reroll the vast majority of skin shards you get and come out ahead and that’s the goal!

While the return on Orange Essence for disenchanting doesn’t get any better, even as you approach the rarest skins in the game, neither do the odds of rolling something better. League of Legends does not take shard rarity into account when rerolling. It is very possible to turn three Legendary shards into a 520 skin unlock. For that reason, the consensus, even among the most rigorously efficient crafters is to disenchant anything worth 1350 RP or higher if you do not want to unlock it. Even with 1350 skins making up more than 40 percent of all available skins, you’re just as likely to turn three of those shards into a lower tier skin.

Until you own every single skin worth 975 and less, it’s not worth the risk. Save that Orange Essence for a future skin shard drop that you want.

One thing to keep in mind is the exorbitant cost of crafting Legendary skins. A single one will set you back 1520 Orange Essence. That’s more than the disenchant cost for four Legendary skin shards, nearly six 1350 skin shards, and almost eight 975 shards. In that sense, crafting one is one of the least efficient things to do. But this is ultimately a game we play to enjoy and if you want one, don’t let that fact hold you back. Craft the skins you want, disenchant the ones you don’t, and keep playing to unlock more.