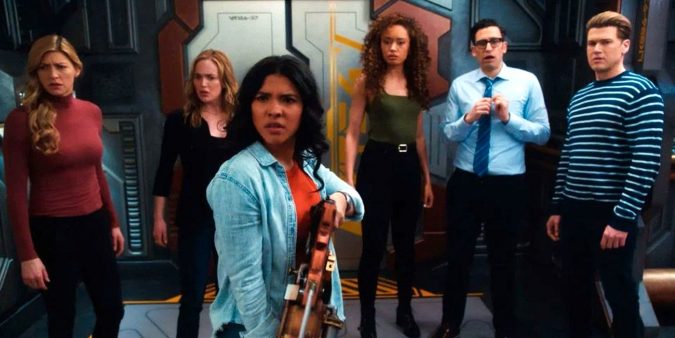 The campaign for a Legends of Tomorrow season 8 renewal trends as fans rally together to get The CW and Warner Bros. TV to bring the show back.

Fans rally together on Twitter to get Legends of Tomorrow season 8 to happen as the campaign gets trending. 2022 is perhaps one of the stranger years for the Arrowverse as a whole when it comes to determining their futures. Traditionally, The CW tends to renew most of their shows in late January/early February, including the majority of their DC shows. However, this year has been a different story for Greg Berlanti’s DC TV franchise. This year began with the shocking reveal that The CW is currently up for sale, with its owners WarnerMedia and Paramount looking to sell it either completely or retain a minority stake.

While this put a delay in The CW’s renewal and cancelation process for the 2022-2023 TV season, Legends of Tomorrow season 7 ended in early March. Not only did the season finale end with the introduction of Booster Gold, but it finished with a cliffhanger where the Legends got arrested by the Time police. Batwoman season 3 is in a similar position where they ended their finale with a mysterious new threat being set up for a potential fourth season. Things got more concerning for both DC dramas when two of The CW’s Arrowverse series, The Flash and Superman & Lois, scored renewals last month.

As fans await The CW’s decision on Legends of Tomorrow’s future, they are making their voices heard through social media. Celebrated by the official Legends of Tomorrow Writers Room Twitter account, the campaign #RenewLegendsOfTomorrow has gone trending on Twitter, with viewers coming together to share their love for the DC series. Posts have included things they enjoy most about Legends of Tomorrow, funny memes, and more as they hope to get The CW to consider bringing the show back for another season.

While no official decisions have been made for a potential Legends of Tomorrow season 8, there is another reason that has gotten long-time viewers concerned for the show’s future. Aside from The CW’s future being completely uncertain due to the sales situation, a report in early March stated that Legends of Tomorrow was one of the two Arrowverse dramas that are currently on the bubble, alongside Batwoman. At this point, viewers may not find out until late April/early May, or on May 19 specifically, which is when The CW has their Upfronts day scheduled.

As stressful as it is to not know if a beloved TV show is coming back or not, #RenewLegendsOfTomorrow shows how powerful social media can be. This wouldn’t have been possible 20 years ago due to the internet still being something new to society where Twitter, Instagram, and other social media platforms didn’t exist. If Legends of Tomorrow season 8 goes forward, one of the big new additions will be Donald Faison’s Booster Gold, as he will be a series regular. While the wait may feel long, fans will hopefully know as soon as possible if The CW brings Legends of Tomorrow back or not for the next season.

MORE: Everything We Know About Legends of Tomorrow Season 8