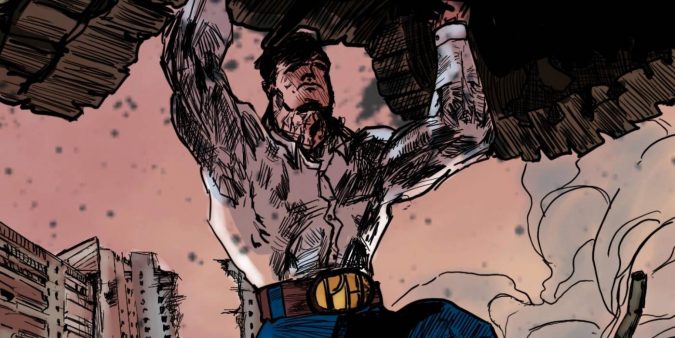 Indie comic book creator Héctor Rodríguez has released a digital comic intended to raise money for children in Ukraine affected by the war.

Indie comic book creator Héctor Rodríguez has released a digital comic intended to raise money for children in Ukraine affected by the war. Readers can purchase the comic featuring El Peso Hero for any price they choose, and proceeds will go to UNICEF.

Recently, Mexican President Andrés Manuel López Obrador promoted Mexico’s non-interventionist policy in light of Russia’s attack on Ukraine. The response prompted Chicano comic book writer and artist Héctor Rodríguez to consider the ways in which he could contribute and make a difference, as the Mexican President had opted to not involve his country. The fifth grade bilingual teacher turned to a Mexican American superhero he conceptualized in 2011 called “El Peso Hero,” who has gone onto fight real world threats including the cartel, corrupt politicians, and human traffickers.

Originally reported by NBC News, Rodríguez has released an 18-page comic online through Rio Bravo Comics intended to raise donations for Ukrainian children. The comic tells the story of El Peso Hero, as he is tasked by the Red Cross to find a missing person in Ukraine amidst the catastrophe. After some hesitancy to leave his country, he travels to Kyiv and realizes the dark state they are in. The issue titled El Peso Hero: Ukraine is available on Rio Bravo Comics for any amount of donation which readers are willing to contribute to the cause.

While other creators have similarly found ways to donate to the Ukrainian people through comics, Rodríguez came up with the idea independently. He spoke on the initiative, saying, “This comic book is a direct contradiction against Mexico’s current policy on the war… Mexico’s complete neutrality is very disappointing to me, because it has always been there for humanitarian causes. So if Obrador isn’t stepping up, then El Peso Hero will do the right thing for the citizens of the Ukraine.” He also spoke on the original purpose of El Peso Hero, who initially became a topic of conversation when he appeared on a comic book cover in 2015 punching President Donald Trump. The illustration was political commentary in response to his comments on immigrants being criminals and rapists. “El Peso Hero stands as a symbol for what other countries should be doing to help children and citizens in the Ukraine. Readers will see him facing two bad options. But as a superhero, he always invents a third option that is a force of good, regardless of politics.”

Venom Would Hate One Spider-Man Variant Above All Others

Timothy Mably writes news relating to the comic book industry for Screen Rant. His passion for storytelling was instilled at an early age, and eventually evolved into his pursuit of journalism. Timothy currently lives in Los Angeles, California.