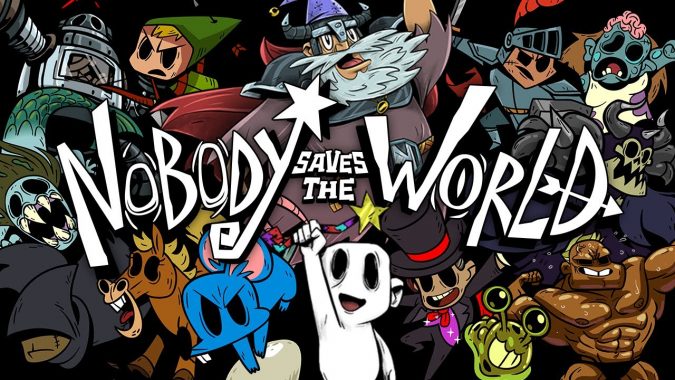 Nobody Saves the World, the shapeshifting action title by Drinkbox Studios that was released earlier this year on Steam and Xbox, is out today on the Nintendo Switch and PlayStation platforms. Alongside the launch, all versions of the game have received an update allowing for local co-op play. Casting players as a weird little baby who can transform into progressively weirder and more powerful forms, Nobody Saves the World is one of those games that seems right at home on the Switch to me — it looks good, but it isn’t too graphically demanding, and the top-down action suits handheld mode.

I played through Nobody Saves the World on Xbox Game Pass when it launched, and found it to be a compelling Zelda-inspired game that focuses more on combat than puzzle-solving. The game’s art style is charmingly different, and there are a number of cute sidequests (you can become a horse and marry a horse), but the real meat of the experience is in the transformations. Different forms are suited for different tasks, and eventually you get the ability to mix and match powers to become, say, a rat that can raise the dead or a dragon who can heal itself with holy light. Some of the higher-level dungeons can get pretty tricky, requiring creative use of your available tools to make it through their challenges. If you’re the kind of person who likes messing with builds in games and trying to find broken combinations of abilities, then you’ll appreciate the possibilities on offer here.

That said, I did find that Nobody Saves the World veered into pretty grindy territory midway through. You upgrade your different forms by completing little quests, and these can quickly pile up. They’re by no means necessary to complete the game, but if you want to get the best forms — or just have an easily-baited completionist mindset — then you’re going to want to pursue them. That ends up meaning a lot of repetitive use of abilities and forms to try to knock them out, which came to feel kind of like ticking off checkboxes to me. It’s not that this aspect of the game is bad, exactly, and in fact it’s what a lot of people are looking for in a game like Nobody Saves the World. I’ve just become a little more wary of RPG mechanics in games lately, because part of me feels like I’m wasting my time simply making a number go up.

So there is some grinding, there aren’t as many form-based puzzles as I was hoping for, and the humor can occasionally grate, but Nobody Saves the World is still a solid action-RPG title that’s well worth picking up if you’re into this kind of thing, especially given that it’s currently on sale for 10% the normal price of $24.99. Or, if you’re an Xbox Game Pass subscriber, you can still try it out for free using that service. If you do, be sure to say hi to Randy for me. Love that guy.