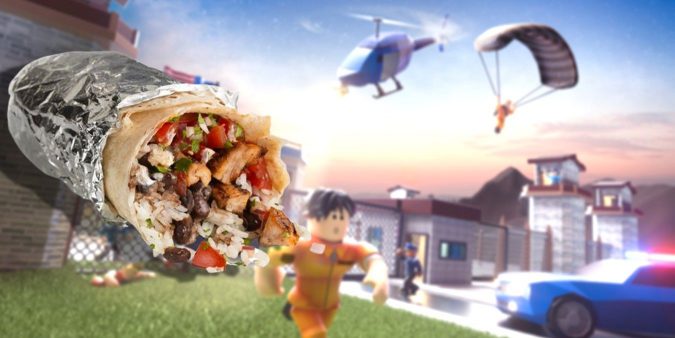 Roblox’s new collaboration with Chipotle allows players to work in a virtual version of the restaurant and can earn them a real burrito at Chipotle.

The extremely popular platform Roblox’s recent collaboration with Chipotle will allow players to work in the virtual restaurant and earn in-game currency that can purchase real burritos. The online game platform and game development system is no stranger to working with companies, having done something similar last year with Roblox’s Ghostopia adding The Addam’s Family after partnering with MGM. Although the platform has had its fair share of controversy due to these partnerships, Roblox has skyrocketed in popularity in recent years even though it has been around since 2006.

Roblox’s collaborations range from in-game concerts to games developed specifically for brands and companies. While the results are exciting and unique, many fans feel that they tend to be plagued by microtransactions. A virtual currency called Robux is the backbone supporting the Roblox marketplace, where users can purchase items for their Roblox avatar or game-specific items and advantages. Sometimes in-game object prices can get out of hand, however, especially with company partnerships such as the virtual Roblox Gucci handbags for avatars that at one point sold for millions or Robux – equivalent to thousands of US dollars.

The latest company collaboration for Roblox seems to benefit fans outside of the virtual world. According to GameSpot, a new Chipotle Mexican Grill game is available on Roblox’s website in celebration of National Burrito Day. The quirky game titled Chipotle Burrito Builder will allow players to work in the virtual establishment rolling burritos in exchange for “Burrito Bucks”. Most excitingly, 100 “Burrito Bucks” can be exchanged for a real burrito in Chipotle restaurants. There are in-game benefits, too, including Chipotle merch for Roblox avatars.

The opportunity to earn real-life rewards for playing a Roblox game is intriguing, especially with talks of the contentious metaverse. Roblox has encouraged the metaverse experience through its various virtual worlds for a while and with millions of games to choose from already and allowing anyone to easily develop experiences through the Roblox Studio, this isn’t surprising. Although previously Roblox was accused of exploiting young game developers by paying them in Robux which is hard to exchange for real money, the game creation community on the platform is currently thriving and so is Roblox financially.

It’s no wonder companies continuously work with Roblox, as the company’s revenue reached the billions in 2021 and has over 200 million registered players. Since a majority of these Roblox users are under 18, many parents have reasonably been concerned over player interactions and frequent microtransactions in the past. However, Roblox has recently established an in-depth age verification system and is seemingly encouraging positive experiences on the site, now including the ability to earn free burritos at Chipotle.

Next: Is Roblox Safe For Kids: What Every Parent Should Know

Amaya Lane is a writer for Screenrant, streamer, gamer, and artist based in Ohio. She is currently studying video game design and coding while working on personal artwork and projects. Amaya spends most of her free time with internet friends and her loyal cat, Ivy.