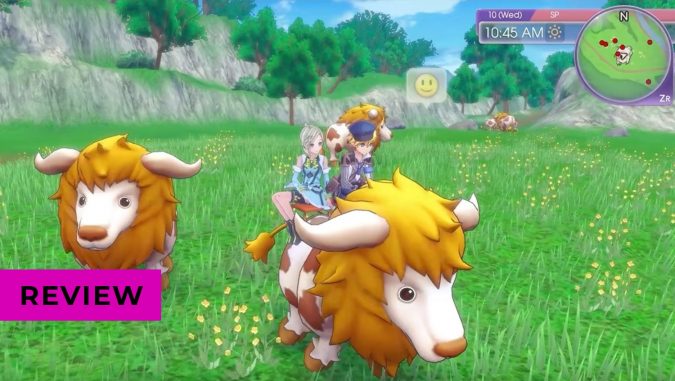 It didn’t take long for Rune Factory 5 to sink its hooks into me. I settled back into the familiar gameplay loop of farming, dungeon crawling, and crafting almost instantly. I woke up in the morning to water and sell my crops, checked on my monsters as they tilled their own field, cut through tree stumps and smashed rocks to collect upgrade materials for my farm, chatted with my neighbors, then set off to explore some dungeons. After I finished dungeon crawling, I took a relaxing soak in the hot springs, then did some crafting before bed.

Like any farming sim, this monotony is part of the appeal. There’s something about creating and sticking to your own routine that makes these games so hard to put down. There’s immense satisfaction in having your hard work and dedication pay off; not by gaining money, but by seeing your ugly trash-ridden plot of land evolve into a field of vibrant fruits and vegetables. It evokes a real feeling of accomplishment.

Crafting is as important as tending to your crops, and you hand make everything from weapons and armor to potions and food. Learning crafting recipes requires you to eat “recipe bread,” which is an annoying system where you can’t see what recipes you’ll be unlocking. If your level in a particular crafting trade isn’t high enough, you won’t be able to learn anything, meaning you’re stuck making the same things over and over until you’ve leveled up to expand your options. Unlike farming, it’s tedious in the worst possible way.

Combat in past games have been very hack-and-slash, but Rune Factory 5 takes cues from recent entries in the Ys series and places an emphasis on split-second dodges and quick combos. You can also take your friends from Rigbar and monsters you’ve tamed along with you. Trekking through dungeons with a party makes fights easier and opens up the option to team up for Link Attacks. Combat has never been very deep in the series, though I do think the simplicity helps give dungeon exploration a speedy pace. There’s a wide variety of weapons and rune abilities to choose from which also help to keep battles a bit more interesting.

What hinders combat from feeling truly engaging are the large number of technical issues that plague the game. Target-locking just feels off in a way that’s hard to describe. It’s all very imprecise and there’s no real feeling of impact to your attacks or weight to your movement. Farming also suffers from these issues; input lag is a huge problem and led to planted crops accidentally getting destroyed when I tried to till an empty spot in my field. Frequent pop-in causes your crops to disappear completely when loading into your farm only to suddenly come back a solid 10 seconds later.

The biggest problem is the atrocious frame rate, which is even worse than other stutter-heavy Switch exclusives like Hyrule Warriors: Age of Calamity. It’s constantly dropping, especially when entering and exiting areas or when there’s too many things happening at once in dungeons. It’s impossible to get pumped up about executing a perfect dodge during combat when the game grinds to a halt. None of the performance issues are game breaking, but it’s clear that limiting the game to the Switch wasn’t the best idea and it really sours the entire experience.

Rune Factory 5’s cast is its strongest saving grace. There’s such a wide variety of characters in the town of Rigbar each with distinct personalities that shine thanks to an absolutely fantastic localization. For example, Cecil is a wannabe detective whose passion for solving mysteries is fueled by a personal quest, Scarlett is a cold by-the-rules killjoy who slowly warms up while working alongside you, and Ryker is a lazy carpenter and easy frontrunner for Video Game Twink of the Year. They’re just a small sample of the six bachelors and six bachelorettes you can romance.

I haven’t reached the point in my relationship with a candidate where I can marry them, but that’s largely due to being unable to choose between my options. Rune Factory 5 is the first in the series that allows for same-gender marriage so I was excited to finally be the gay little farmer I’ve longed to be. I thought for sure that Cecil would be my pick because “dorky boy detective” is such a fun concept, but I soon found myself unexpectedly charmed by Murakumo, a were-animal himbo who runs Rigbar’s inn with an endearing generosity that hampers his profits. I imagine this level of indecisiveness is the same for anyone looking to woo the bachelorettes too, as I found them equally as lovable despite never pursuing a romance with them.

The core gameplay loop and quirky characters made Rune Factory 5 fun in spite of its technical faults. But there’s a bigger issue for me than performance; as a fan of the series since the very beginning, I can’t help but feel let down. It’s a bummer that the gameplay hasn’t evolved in a truly meaningful way since Rune Factory 4. Niche games like this are made for a very specific audience and it’s certainly one which craves the level of familiarity that Rune Factory 5 brings, but past entries have kept the same formula while refreshing it; the third game gave you the ability to transform into a monster, for example, while Tides of Destiny had you switching between two protagonists.

So many franchises are rightfully criticized for feeling too similar with each entry and Rune Factory shouldn’t get a pass just because it’s comforting to play. After waiting an entire decade for more Rune Factory, I wish this entry had more creativity to make that wait worthwhile.