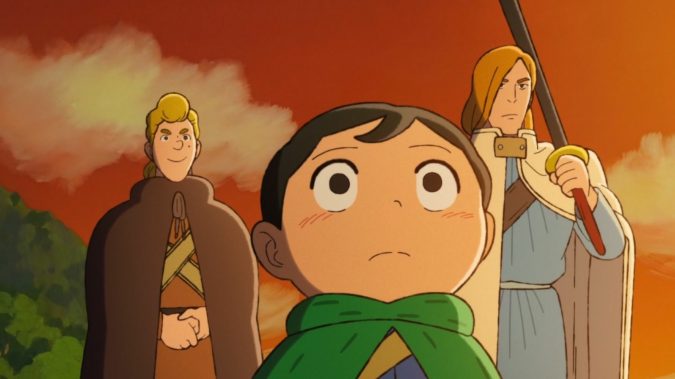 Do you like “nice” TV, but wish it was a little less… well, nice? Did you enjoy Parks and Rec, Ted Lasso, and every other show that’s been called “radical” solely because it lacked conflict, and now feel a little embarrassed about it? Do you want to feel good about the world, but still be reminded that things are, in fact, pretty bad? I have some good news for you: a show called Ranking of Kings.

At first glance, the anime series, produced by Wit Studio, seems like a take on the premise of Steven Universe: An awkward young man — in this case, Prince Bojji — battles an increasingly terrifying series of enemies using the power of kindness. (Of course, this also describes one of the other standout anime series of the past decade, Mob Psycho 100.) But Ranking of Kings takes that basic idea and carves out a niche all its own.

Bojji really does have a lot of obstacles to overcome — he’s deaf, mute, and lacks nearly all physical strength. And while Ranking of Kings does spend some time laying out the ways in which Bojji parlays his perceived weaknesses into strengths (in particular, his hidden ability to read lips), the series steadfastly refuses to engage in any of the treacly cliches that might plague a “feel-good” story about disability. After the first couple of episodes, Bojji’s disabilities are treated as matter-of-fact limitations, albeit ones he knows how to work around, instead of sources of forced, artificial pathos. And beyond Bojji, Ranking of Kings features what is easily the best fantasy ensemble this side of Game of Thrones. Archetypes abound, whether it’s Bojji’s stern stepmother Hiling, his haughty stepbrother Daida, or the family’s noble swordsman and retainer Domas. Each character is introduced in their most one-dimensional form and almost immediately deepened, wrinkled, and made to surprise, until the cast is full of fascinating, compelling people. Over the course of the series, Ranking of Kings does the near-impossible: It makes all of its characters complex.

This means that, while Ranking of Kings has a core of kindness that does evoke the past few years of “heartwarming” TV, there is also real, irresolvable conflict. We may come to see the villains’ point of view, and Bojji may even reach some kind of understanding with them, but that doesn’t change the fact that the characters simply have mutually exclusive goals that butt up against one another, and for one person to get what they want, someone else has to lose. It’s odd to say about a series that features hellhounds and wizards, but Ranking of Kings is much more realistic than the most prestigious “nice” shows: Everyone can do their best and still come to blows.

Thankfully, Ranking of Kings doesn’t just humanize its villains. It also complicates its heroes, and goes out of its way to show what has led various players to take drastic, even violent measures. Side characters will originally appear as a gag, then show up a few episodes later with fully fleshed-out backstories. Even the immortal nightmare swordsman Ouken, the closest thing the series really has to an uncomplicated, nakedly violent big bad, is a force of nature, more akin to a monster from a horror movie than a character from an adventure tale. So while it’s probably not a spoiler to note that things turn out okay for Bojji and that, yes, the power of friendship frequently does triumph, huge chunks of Ranking of Kings are still grim, grim, grim. The backstory for Bojji’s friend Kage — the last surviving member of the apparently villainous shadow clan — is unbearably sad, and though some of the other characters come to accept Kage, he never really transcends his initial outcast status in society writ large. Supposedly good-hearted characters do truly evil things. And though Bojji often tries to communicate with his enemies, he also doesn’t run from a fight.

Wit is probably best known for its work on the first three seasons of Attack on Titan, and the combat in Ranking of Kings more than lives up to that standard. Even gag fights display the dynamism and deft camerawork of Attack on Titan’s best ODM-fueled human-versus-Titan battles. By the end of the season, Ranking of Kings has fully committed to showing both the emotional and the physical reality of its fights, producing some truly breathtaking sequences. And even in scenes where the characters are just walking around, the rich, almost watercolor-like style makes the show a delight to look at.

Are there issues with Ranking of Kings? Absolutely. (In particular, the series translates backstory decisions from the original manga that seem to endorse Japan’s colonization of Korea.) But they’re the sort of things that, for me at least, didn’t tarnish the glow of a first viewing, and will in fact be subjects for discussion on further rewatches and engagement with the series. The problems with the series are visible, minor imperfections in something that’s otherwise straightforwardly beautiful. And that, really, is the nicest thing you can say about a TV show.