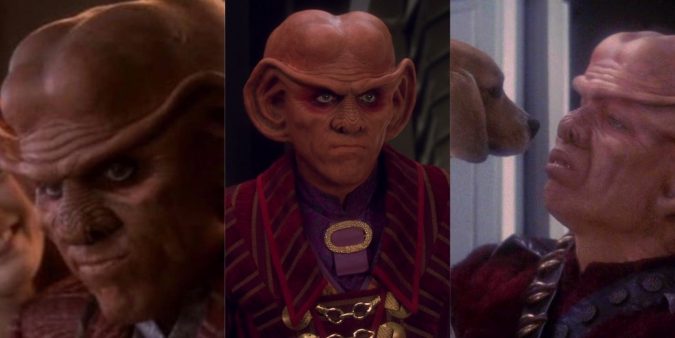 Originally shown to be unrepentant villains in Star Trek: The Next Generation, the race known as the Ferengi really flourished once they appeared on Deep Space Nine. With a strict culture that revolves around an exaggerated form of capitalism, the Ferengi were an interesting foil to their Federation counterparts.

Whether they are making first contact with humans in Enterprise, or being some of the most beloved characters on Deep Space Nine, the Ferengi are one of the most memorable races in Trek history. While there are many great episodes that revolve around the Ferengi, some garnered higher scores on IMDb.

Deep Space Nine offered fans a deep look at Ferengi culture, but it also showed that not all Ferengi were the same. The episode “Bar Association” sees Rom organize a workers strike against the unfair conditions at Quark’s bar.

Rom and his brother Quark have two different outlooks on life, and it caused quite a lot of conflict throughout the show. While Quark is more of a conservative who believes in classical Ferengi strictures, Rom shows that a Ferengi is capable of being so much more than an adherent to the rules of acquisition.

One of the most important themes of the Star Trek universe is characters from disparate backgrounds working together in harmony, despite their differences. In “Body Parts”, Quark learns that he is going to die soon, and ponders whether he should keep with Ferengi custom and auction off his body parts.

Never one to miss out on a chance to profit, Quark is torn between his desire to live, and the opportunity to make money. Meanwhile, many of the other members of the DS9 crew are revolted by the custom, but they eventually come to grips with the fact that it is from a culture that isn’t theirs. Keeping with the Star Trek tradition, people of different races learn more about each other and find common ground in the end.

Outside of the Ferengi inhabitants of the station, many of the best episodes of Deep Space Nine revolved around other Ferengi characters. The episode “Rules of Acquisition” follows a female Ferengi named Pel who must go undercover as a man in order to conduct important business with another race. While she is negotiating, she begins to develop romantic feelings for Quark.

The traditional Ferengi culture is quite patriarchal, and most females of the race are subjugated to less than dignified roles. The episode is great because it shows a character daring to go against tradition and she puts her neck on the line to be a part of her society. While the episode is somewhat hampered by its love plot, it is still a fascinating insight into the Ferengi business culture.

Recounting one of the Federation’s earliest encounters with the Ferengi, the episode “Acquisition” showed the race in their more combative period. When a crew of Ferengi pirates raid the Enterprise, Trip and T’pol are the only two crew members who are left conscious to fight back against the roving marauders.

RELATED: The 20 Best Star Trek TNG Episodes Of All Time

Showing how frightening the early days of warp travel could be, the episode’s villains are somewhat reminiscent of the Ferengi of The Next Generation. Fortunately for viewers, the pirates are given a healthy dose of personality, even down to their humorous foibles. Not known to be one of the most powerful alien races in Star Trek, the Ferengi rely heavily on clever ruses to best their opponents.

Morn was one of the funniest side characters in Star Trek history, and the quiet bar patron was always around in the background, or available for a quick gag. “Who Mourns For Morn?” finds Quark the sole inheritor of Morn’s entire estate when he dies in a shuttle accident. Unfortunately for Quark, Morn’s ex-wife arrives and threatens to sue Quark unless he cuts her in.

Faced with a character that surpasses his greediness, Quark begins to see the error of his ways, and misses his old patron. While Quark was usually frustratingly unfair to his friends and relatives throughout the show, he also grew and changed as the series went on. In the episode, fans got a chance to see his softer side come out.

Giving the main characters a break for once, the episode “In the Cards” gave two of DS9’s side characters a chance to relive their past. Jake Sisko and Nog decide to do anything to cheer up the captain who is dealing with the fatigue of war. No matter what it takes, the duo goes all out to secure him a genuine Willie Mays baseball card.

Reminiscent of the early episodes of the series that featured the younger Sisko and Nog getting into trouble, “In the Cards” is a pleasant bit of nostalgia. Nog and Jake’s friendship is an important part of DS9 lore and shows that the two races are not so different, and are capable of getting along swimmingly.

Not only is “House of Quark” a great Ferengi episode, but it is also one of the best Klingon episodes as well. Quark finds himself in hot water when he is forced to marry a Klingon woman after wrongfully taking credit for the death of her husband.

Not known for his physical prowess, Quark is in over his head with the abrasive Klingons that he runs into. The episode is a humorous detour for the series, and shows that Ferengi culture not only clashes with human culture, but Klingon as well. Ultimately, Quark finds a way to work his way out of the jam, but not without a few bumps and bruises first.

“The Magnificent Ferengi” casts Quark and his fellow Ferengi in an unfamiliar role, that of a band of action heroes. When Quark’s mother is kidnapped by the Dominion, the barkeep must assemble a crack team of Ferengi to rescue her from the clutches of evil.

RELATED: The Best Star Trek Series, Ranked According To IMDb

With a heaping helping of humor and excitement, “The Magnificent Ferengi” allows the race to shine like few episodes had before. Though they aren’t necessarily suited for gung-ho action, their unique talents all blend together to help save the day in the end. As their leader, Quark gets to show off the best aspects of his personality, and he acts purely out of love for his mother, and not for any financial gain.

Though the Ferengi plot is buried amongst the many other threads of the episode, “The Dogs Of War” offers a view into the Ferengi political situation after the end of DS9. With the Dominion War raging in the background, the Grand Nagus arrives on the station to tell Quark that he has been hand picked as his successor to the title.

Given the opportunity to make more money than he ever could before, Quark is nevertheless torn between profit, and the emotional gains he made during the series. While the offer is incredibly tempting, Quark isn’t necessarily the Ferengi he was when the series first started, and he pauses to reflect. “The Dogs of War” was the last major Ferengi moment in the series, and was a fitting end to their arc.

Generally regarded as one of the best episodes in Star Trek history, “Little Green Men” attempted to explain one of recent history’s greatest mysteries. When escorting Nog to Earth for his Starfleet Academy training, Quark, Rom, and Nog are transported back in time to the year 1947.

Fleshing out the infamous Roswell UFO crash of the late 1940s, the episode is a hilarious romp through the past. Coming face to face with aliens leaves the humans perplexed, and it is funny to think that the Ferengi were the inspiration for the classic grey alien design. Ultimately though, the episode gives the close-knit family one last chance to bond before Nog is sent away to the Academy.

NEXT: The 10 Best Borg Episodes Of Star Trek, According To IMDb

Next
Better Call Saul: The 8 Biggest Villains On The Show, Ranked

Dalton is a freelance writer and novelist from Orlando Florida. He currently lives in Los Angeles and pursues writing full time. He is an avid reader and film buff.