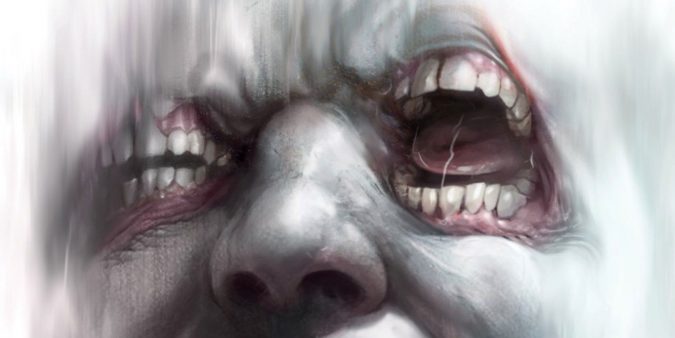 Warning: Spoilers for Nightmare Country #1 ahead!

The gory, grotesque new Sandman Universe spin-off, Nightmare Country, is on full display in a newly released variant cover for issue #2, featuring the horrifying Corinthian originally created by Neil Gaiman. Nightmare Country knows it is nightmare fuel, even using this phrase in its first issue, and DC Comics has hired amazing artists to create artful depictions of humanity’s worst fears.

Nightmare Country is the latest in a series of new comics taking place in Neil Gaiman’s ever expanding Sandman Universe, and it focuses on a monster created by the original Dream, Morpheus. The Corinthian is a living nightmare, “created to be a dark mirror and tormentor of humanity,” and is typically depicted in a man’s body with shocking white hair and dark sunglasses. However when the sunglasses are removed is when the real nightmare created by Sandman begins, as the Corinthian has no eyes, just two sets of snarling, licking mouths in his sockets.

Nightmare Country, published by DC’s mature Black Label imprint, is written by the legendary James Tynion IV (The Nice House on the Lake, Something Is Killing the Children) with devastatingly wicked art by Lisandro Estherren (Redneck, Strange Skies Over East Berlin). The series features guest artists illustrating “The Dreaming” every issue, as well as a series of horrifying variant covers. DC Nation recently posted an upcoming 1:25 incentive variant cover for Nightmare Country #2 illustrated by Francesco Mattina (Azrael, Batman Confidential, DCeased) that depicts the Corinthian in all his terribly glory, with a haunting view of the monster’s screaming eye mouths. This gorgeous but terrifying variant cover solidifies the fact that the Sandman Universe is continuing to find success in capturing the essence of old Vertigo comics, which is where Sandman was originally published and became a critical success.

THE SANDMAN UNIVERSE: NIGHTMARE COUNTRY #2 arrives May 10 with an appropriately unsettling 1:25 variant cover by Francesco Mattina—along with a 1:50 foil variant! Preorder at your local comic shop by this Sunday. pic.twitter.com/8ZavNWYk6T

James Tynion IV and DC acknowledge how horrifying this new series, and the Corinthian, truly is, in the first issue of Nightmare Country when a new character Flynn’s art is revealed depicting variations on the Corinthian, which her one night stand calls, “real nightmare fuel.” The Corinthian in Nightmare Country is actually not the first Corinthian, after the first was destroyed by Morpheus since he was just a serial killer and was fulfilling his “purpose.” It is clear that this new Corinthian, first created in The Kindly Ones, is still obsessed with the first Corinthian’s murder spree, reminiscing on the memories of the terror it caused and writing them all down in a notebook. Apparently the Corinthian has been freed by the Sandman to somehow take down an even more horrifying threat, and by the end of issue one it seems like this threat may be “The Smiling Man,” a large amorphous creature who also has mouths for eyes! Mattina’s variant cover paints a perfect picture of how horrifying it would be to ever run into the Corinthian without his sunglasses on, with the creatures eye mouths shown to be in an evocative scream of either agony or ecstasy.

With the Sandman Universe continuing to grow, like with the recent crossover into the Locke & Key universe, it is already clear that Nightmare Country is going to quickly establish itself as a classic story within the expanding world. Francesco Mattina’s variant cover of the Corinthian is only the beginning of the horror that Sandman Universe: Nightmare Country will bring, as multiple nightmares collide with humanity’s soul as collateral damage.

Alex Schlesinger is a freelance Comics News writer for Screen Rant. While his career is in social work, one of his biggest passions is reading and writing about comic books. While Alex loves to write about all things comics, the X-Men will always hold a special place in his heart.

Alex lives in Seattle with his fiancé Zach and their two cats Jasper & Harley. When not writing Comics News he is cooking, baking, reading science fiction, and travelling around the Pacific Northwest.