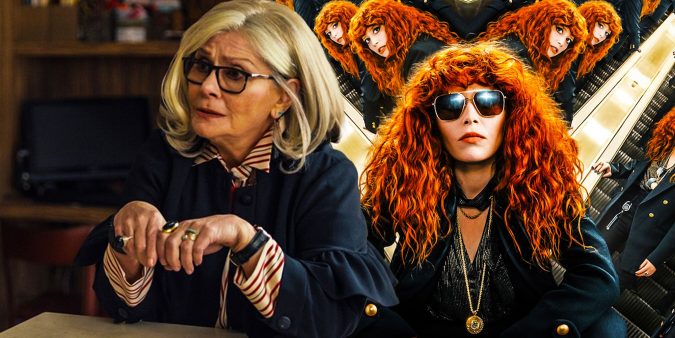 Why Russian Doll Season 2 moves toward a single important death that is so much darker than all of Nadia’s recurring deaths in Season 1 explained.

Early in Russian Doll season 2, Nadia and Alan discover that they are able to use the subway train as a portal to the past. Nadia first arrives in 1982 as her mother, Nora (Chloë Sevigny), at a time when she was pregnant with Nadia. Here, Nadia meets the young Ruth Brenner (Annie Murphy) as her mother knew her, and can see how Ruth cared for Nora and eventually became Nadia’s honorary mother. Under the assumption, they have been sent back in time to right a wrong, Nadia and Alan interact with their relative’s past lives by using the time-traveling train with both hoping they can change their lives in 2022, but they ultimately end up collapsing the timelines in a potentially catastrophic way.

The change in narrative direction explains why Russian Doll season 2’s single death is so much darker. In Russian Doll season 1, trapped inside the time loop the vast majority of Alan and Nadia’s deaths were played for laughs, deriving an irreverent form of black comedy. However, in Russian Doll season 2, Nadia hopes to prevent Ruth’s death, recommending to the 1982 version of her that she stop smoking to no avail.  Learning that fixed points can’t be altered makes reality difficult for Nadia as the Ruth of 2022 (Elizabeth Ashley) slowly grows sicker throughout Russian Doll Season 2. While the deaths in Russian Doll season 1 were largely inconsequential and became almost tiresome for the characters, Ruth’s death becomes an undeniable truth that Nadia must learn to face, and the series truly focuses on Nadia and Alan each learning that some things are simply out of their control and they must enjoy what they have while they can.

Russian Doll’s dark theme and styling are emphasized by a narrative tied to the Nazis and the Berlin Wall, but Nadia’s journey to accepting her own personal loss is what makes the show most uncomfortable at times. Russian Doll Season 2 introduces Ruth’s health state in the first episode, and off-handedly Nadia wonders if Ruth shouldn’t be driving anymore. While Maxine (Greta Lee) attempts to get Nadia to focus on the fact that Ruth is reaching the end of her life, Nadia avoids the truth and brushes it off. Shortly after, Nadia’s first experience with time travel occurs, marked by the re-appearance of Horse, and Nadia becomes focused on the quest of finding her family’s lost treasure for most of Russian Doll season 2 as she pursues her “Coney Island” in the hopes that she can simply fix everything.

Initially, Nadia is so focused on righting a wrong in the past, that she watches 2022’s Ruth decay in fragments. Disappearing for hours and days at a time means that the responsibility for taking care of Ruth passes to Maxine. While Nadia finds some comfort in spending time with the younger version of Ruth in 1982, it ultimately means that Nadia doesn’t get the chance to say goodbye nor gets to be there in Ruth’s true final moments. While Nadia was able to fix the issues she made by breaking time, she had to confront extreme loss as part of her overall character growth. Russian Doll’s season finale concludes at Ruth’s wake, and as Nadia finally faces grief head-on it is notable that Nadia and Alan appear truly happy for the first time. While Russian Doll season 2 was much darker than its predecessor, it finally came out with a positive message of living in the moment and not focusing on ideas of what might have been, but never can be.

Next: Russian Doll Season 3: Everything We Know