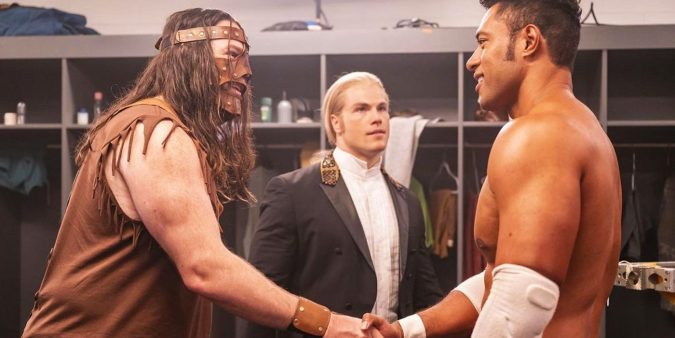 Young Rock season 2 images highlight WWE icons The Undertaker, Steve Austin, and Triple H. The NBC sitcom, which follows Dwayne Johnson through different periods of his life, announced heading into season 2 that it would include actors portraying legendary WWE wrestlers while shedding light on Johnson’s early wrestling career. Young Rock season 2 episode 8, titled “Corpus Christi” and debuting on May 3, will examine Johnson’s tryout match with WWE, which took place in 1996 at a live event in Corpus Christi, Texas. And, naturally, given the episode’s focus, several WWE headliners will be making appearances.

Johnson, who co-created the sitcom and appears in it, playing a version of himself, shares a preview of the Young Rock season 2 episode on Instagram. In his caption, he mentions that “Corpus Christi” would be a treat for fans of professional wrestling. He also writes about meeting The Ringmaster, who would, of course, later drop that moniker to take on the transformative persona of Stone Cold Steve Austin. Johnson’s post, which includes glimpses of The Undertaker, Mankind, and Hunter Hearst Helmsley, is included below:

Young Rock has routinely featured wrestlers and famous figures throughout its run. For season 2 episode 8, independent wrestler Luke Hawx takes on the role of Steve Austin, while Brock Dunstan plays Mankind. Josh Rawiri portrays Undertaker, sporting that unforgettable purple gear, and Miles Burris appears as Hunter Hearst Helmsley, who would later be known simply as Triple H. Brad Burroughs and Gawain Johnstone also guest star as Michael PS Hayes and Mantaur, respectively. Depending on how Young Rock unfolds, these actors could end up becoming a big part of the story moving forward.

Abdullah Al-Ghamdi joined Screen Rant in August 2019, focusing on movie and television news. In January of the same year, he wrote a 3500+ word piece on why Primo Colón is underrated. He considers it his finest work. When he’s not arguing for the merits of his favorite wrestler, he can be reached at: alghamdisabdullah@gmail.com.