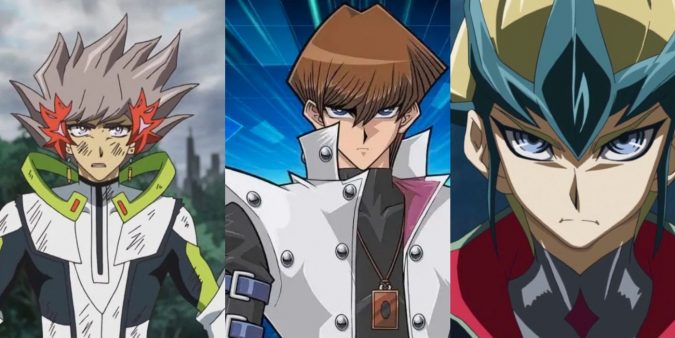 For as long as Yu-Gi-Oh! protagonists have been saving the world from evil, their rivals have been there to assist them and challenge them. All 7 series in the franchise have different relationships between the rival and protagonist, although each rival carries a part of Seto Kaiba, the original rival.

What makes a good rival is a mix of how well they push the protagonist, their development as a character in their own right, and what iconic cards they brought to the game. Every rival has something great about them, but some outshine the others.

The Sevens rival is arguably the best Yu-Gi-Oh! duelist in the main cast and is certainly stronger than the protagonist Yuga for the vast majority of the series. Luke is a spunky kid from Yuga’s school who becomes fascinated by the concept of rush duels and views its creator Yuga as a mentor figure, despite Luke being the superior duelist.

Luke is a strong duelist, but he doesn’t undergo quite the level of character development that other characters in the series have. Whereas other rivals serve as a wall for the protagonist to overcome and have their own compelling arcs, much of Luke’s story is revolved around constantly beating Yuga until the final episode where the protagonist overcomes him at last. Luke also didn’t introduce any unique or iconic cards into the main game, although his ace monster “Rush Dragon Dragears” is certainly a powerful Rush Duel monster. Luke is a good character, but the other rivals are great.

Revolver’s family was involved in the creation of the Ignis, a group of dangerous AI with incredible power. To make up for those mistakes, Revolver made it his mission to destroy the Ignis.

The biggest knock on Revolver as a duelist is that he’s the only main rival to ever lose to a Yu-Gi-Oh! “Joey clone” in a duel. Despite this, his relationship with Soulburner is part of what made him such a great character, so his loss as a duelist was part of his biggest win as a character. Revolver’s duels against Playmaker were huge for the protagonist’s growth, and he even brought possibly the most powerful boss monster in the history of the competitive game: “Topological Gumblar Dragon.”

Kaito began the series as a secondary antagonist working for his father Dr. Faker, hunting the “Number Monsters” to help his ailing brother. Throughout the series, Kaito warmed up to Yuma and eventually joined his team to fight against the Barians in the final arc.

Kaito never lost to Yuma, but always pushed him to be stronger. Kaito’s final duel against Mizael is one of the highlights of the entire series, and Kaito displayed remarkable growth between the first and final arcs. Kaito’s “Photon” archetype never made it big in the actual game, but “Galaxy-Eyes Photon Dragon” remains an incredibly iconic Yu-Gi-Oh! card.

“Manjome Thunder” may be best remembered as Chazz Princeton in the dub. Manjoume started off as a spoiled rich kid in Obelisk Blue, but underwent so much turmoil at Duel Academy that he grew into a reluctantly empathetic man and a great friend to Judai and the team.

Manjoume’s journey from only believing in strong cards to winning his final major duel with the 0ATK Ojama Yellow is one of the best arcs in the series as far as dueling is concerned.

Akaba Reiji perhaps took the most influence from Kaiba, being the young president of a company completely devoted to his younger sibling. Similar to Kaiba, Reiji also has an estranged relationship with his father and makes it his mission to stop him.

Reiji’s creation of the lancers helped Yuya grow as a duelist exponentially, and the two shared a remarkable final duel by the end of the series. The best rivals both teach and learn from the protagonist, and Yuya and Reiji needed one another throughout the story. Reiji also brought the iconic anime archetype D/D to the game, an archetype that has seen competitive play and continues to get support.

The original rival, Seto Kaiba is perhaps the best character in the original Yu-Gi-Oh! series. Kaiba began episode 1 as a villain after the fourth copy of Blue-Eyes White Dragon, but after a loss to Yugi he slowly began to change as a person for the better.

Maybe the best part about Kaiba was how his views and outlook on life changed greatly, but his snarky personality and arrogance never altered. It’s a type of character development that’s more true to how people change in real life, and it fit his relationship with Yugi perfectly. Throughout each of their duels, both little Yugi and the Pharaoh learned something from Kaiba, and without Yugi there never would have been a change in Kaiba. The two fit one another perfectly. Kaiba’s ace monster, “Blue-Eyes White Dragon,” is also arguably the face of the entire franchise.

Jack Atlas, the Duel King, spent his childhood with 5DS protagonist Yusei Fudo. After stealing Yusei’s ace monster, Jack moved to the city and became the new king of games. When Jack and Yusei finally reunited years later, they discovered that they were bound by a mark of destiny that five duelists share.

Jack’s growth from the selfish duel king to the passionate driving force of Team 5DS makes him arguably not just the best rival, but the best character in the entire franchise. Jack and Yusei would never have amounted to anything without each other, and it shows in their duels and in their day-to-day interactions. Without Jack’s tough love in the second arc, Yusei would likely have never gotten over his loss to Kiryu. Jack’s key monster from his last duel, “Crimson Blader,” also made a huge mark on the competitive game’s history.

Next: Each Yu-Gi-Oh! Series, Ranked

Next
The Dropout: The 10 Best Characters, Ranked By Intelligence

Sam is a BFA acting major from Texas Christian University who specializes in both voice acting and freelance writing. After his articles are complete, Sam spends time writing an upcoming novel series and gaming with friends.